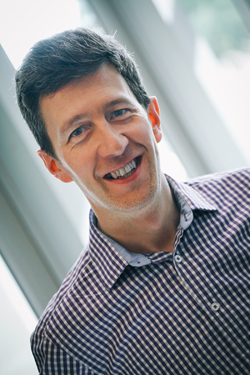 When it comes to research, the concept of “head-banging” most likely conjures images of researchers banging their heads against walls or dry-erase boards.

But for Microsoft researcher Andrew Fitzgibbon, it’s about inspiration.

“I was on a 10-hour flight recently,” he says with a grin. “I put Led Zeppelin on a loop and programmed the entire flight. It was great.”

Fitzgibbon’s world-renowned work in computer vision and related fields has been celebrated for its elegance, but what really excites him is effectiveness. As an example, he points to early research he performed on modeling distortions of images taken through a wide-angle lens.

“What people liked about that work,” he says, “was that it fulfilled the holy grail of what’s called a closed-form solution, which is considered beautiful and mathematically elegant. But oftentimes a less elegant solution actually works better in practice, and you restrict your thinking if you insist on elegance.”

The Song Doesn’t Remain the Same

This straightforward, practical approach is a hallmark of Fitzgibbon’s research career, one that is quickly reaping accolades. The most recent honor for Fitzgibbon (@Awfidius) was being elected a Fellow of the Royal Academy of Engineering. On Sept. 16, he joined a distinguished group of the United Kingdom’s best engineering researchers, innovators, and entrepreneurs from business and industry. (Rick Rashid, chief technology officer of Microsoft’s Applications and Services Group and founder of Microsoft Research, was elected to the Royal Academy of Engineering at the same time, as an International Fellow.)

In the Royal Academy of Engineering’s citation, Fitzgibbon is noted “for putting his research into practice to bring about disruptive changes in the creative industries. His activity is remarkable for its combination of mathematical insight, ambitious problem selection, and practical engineering, leading to significant commercial products which have impacted the film and video games industries.”

“Andrew is a globally renowned researcher in the field of computer vision," adds Andrew Blake, Distinguished Scientist/Laboratory Director, Microsoft Research Cambridge. "On the one hand, he is a rigorous mathematical thinker and technologist, whose work on the geometry and graphics has had a profound effect on the movie industry and on 3D image analysis. On the other, he has a knack of coming at a problem obliquely and seeing an unusual angle, and this makes interacting with him great fun and immensely productive.”

Stairway to Honours Beyond Computer Vision

Fitzgibbon’s research interests lie at the intersection of computer vision and computer graphics, with occasional excursions into neuroscience. He has written papers on models of non-rigid motion, human 3-D perception, new image-processing models, large-scale image search, and nonlinear optimization. He began his studies at University College Cork continued them at Heriot-Watt University in Edinburgh, and received his Ph.D. from The University of Edinburgh in 1997. Until June 2005, when he joined Microsoft Research, he held a Royal Society University Research Fellowship in the Department of Engineering Science at the University of Oxford.

“When I first considered Microsoft Research, I quickly realized that everyone knew hundreds of things I didn’t.”
— Andrew Fitzgibbon

In 2013, Fitzgibbon was one of four winners of the Royal Academy of Engineering’s Silver Medal, awarded for outstanding personal contributions to British engineering that have resulted in successful market exploitation. In 2011, he was part of a team that won the Royal Academy of Engineering’s MacRobert Award, one of the United Kingdom’s most prestigious prizes for engineering innovation.

Add to these an Engineering Emmy Award in 2002 for contributions to the creation of complex visual effects, the British Computer Society’s 2006 Roger Needham award, the International Conference on Computer Vision’s Marr Prize in both 1998 and 2003, nine best-paper awards, and Fellowship in the British Computer Society and the International Association for Pattern Recognition—and you still have only a partial list of Fitzgibbon’s professional recognition.

Asked if there have been any career highlights outside of these prestigious awards that he particularly cherishes, Fitzgibbon chuckles.

"I was thinking the other day how proud I am to be in Bill Buxton's book, Sketching User Experiences," he says. “Bill used one of my quotes in a chapter heading. 'Making a plan and sticking to it guarantees a sub-optimal solution' is the quote, and I feel rather honored that it's in Bill’s book."

Excited by the Misty Mountain Hop of New Ideas

Fitzgibbon firmly believes in making plans, but also that the best possible outcomes only happen if people are willing to make changes to the plan as new information arrives. New information and new ideas have always been great motivators for him.

“When I first considered Microsoft Research,” he recalls, “I quickly realized that everyone interviewing me knew hundreds of things I didn’t. It felt pretty exciting to be surrounded by so many people who knew so much about so many different subjects. I spent my first few years here feeling stupid, which I consider a good thing.

“He has a knack of coming at a problem obliquely and seeing an unusual angle….”
— Andrew Blake

“Everyone who works here gets really, really excited by new ideas. It’s quite common to walk down the corridor and overhear a couple of researchers discussing another researcher’s work with great appreciation and delight.”

With so much opportunity for cross-fertilization across computing disciplines, what is it about computer vision that holds Fitzgibbon’s interest?

“This will sound kind of weird, especially since I did a double major in mathematics and computer science,” he says, “so you’d think I’d want precise solutions. I like it that in computer vision, it’s fairly straightforward to set up a problem and you know you’ve got the right answer—or at least a good answer—when the result is convincing to a human being, which is not exactly a precise mathematical solution.

“For example, very simplistically, here is an image of a frog on a flat lily pad. Can we put the frog on a round rock instead and have the shadows look natural? The solution works if everyone’s happy with the result. For me, the thrill comes from translating the problem into mathematical statements.”

When it comes to proving the work, Fitzgibbon likes the process and intuition required to define “the most correct thing to do.” When building a prototype or system that’s never been built before, there could be hundreds or thousands of small decisions along the way, and it’s impossible to know in advance the significance or impact of those decisions.

“Of course we want to do them all correctly,” he says, “but some decisions could take 20 minutes and others six weeks, so you have to pick and choose and somehow choose well which ones to punt on and which ones to really focus on. Choosing those trade-offs is definitely a skill. I like to work out a list of best possible trade-offs and then work backwards from there.”

Within computer vision itself, the area Fitzgibbon finds most interesting is video. There is a lot to learn about using information from video, particularly in the area of image recovery: recovering a high-resolution image from a low-resolution one, or recovering 3-D information.

“It’s that movement from abstract thinking to something real that excites me the most.”
— Andrew Fitzgibbon

“Imagine a video of a dog running along the beach,” he says. “We don’t have any good algorithms right now for figuring out the 3-D shape of the dog, or modeling how light interacts with the fur, or modeling its running motion. We haven’t gone very far at all in this area, and I want to do more to push the technology.”

Over the Hills and Far Away -- in Seattle

No doubt Fitzgibbon will make the most of an upcoming stay in Seattle to collaborate on video research with colleagues at Microsoft Research Redmond. His wife, a professor of English literature, is taking a sabbatical and will be working at the University of Washington in the early months of 2015. Fitzgibbon and their 3-year-old daughter will be joining her.

He readily admits looking forward to the benefits of living in the Pacific Northwest, namely skiing. He already has skied at several resorts within easy driving distance of Seattle. Fitzgibbon confesses he has to work hard to ensure he doesn’t bore everyone by talking about skiing all the time.

“I’m actually not very good because I didn’t learn properly until I was in my 30s,” he comments, “but I’ve skied in lots of places. I always wanted to go heli-skiing and gave that to myself as a 50th birthday present—five years early.”

No Communication Breakdown about the Beauty of Engineering

Regarding his recent accolade, Fitzgibbon is pondering his future responsibilities as a Fellow of the Royal Academy of Engineering. The organization funds programs that fulfill its mandate to advance and promote excellence in engineering. Of these, programs that address engineering education and activities that improve public awareness and understanding of engineering appeal most to Fitzgibbon.

His impression is that the general public thinks of engineering as “tinkering around with machinery,” whereas he sees it as a total process that begins with abstract thinking, moves to mathematical models, and finishes with something physical and tangible, either an application or an object people can play with or use.

“It’s that movement from abstract thinking to something real that excites me the most,” he says. “I’m quite passionate about getting more people to engage with the beauty of engineering.”