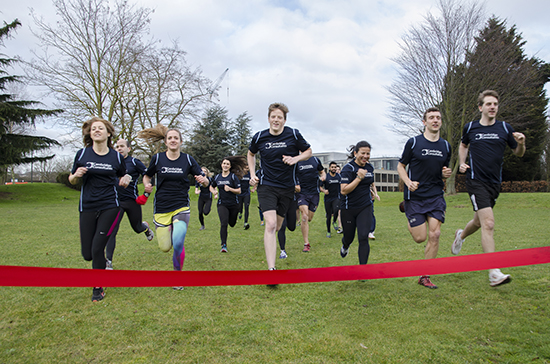 Product design and development firm Cambridge Consultants has announced it is one of the sponsors of next month’s Cambridge Half Marathon – and more than 50 of its staff will be taking part in the charity event.

The company’s runners will between them clock up more than 700 miles to raise money for their chosen ‘charity of the year’ – the East Anglian Air Ambulance (EAAA). And their fundraising efforts will be matched pound for pound by Cambridge Consultants – giving a double boost for the charity, which will soon have Prince William as one of its pilots.

“We are delighted that so many of our staff are putting time and effort into making this community event such a success,” said Alan Richardson, CEO of Cambridge Consultants. “As a company we wanted to show our support by sponsoring the event – as well as fund matching the team’s sponsorship money.”

The fourth Cambridge Half Marathon is being held on Sunday 8th March, starting at 9.30am. The course will be two loops, beginning on Victoria Avenue and passing some of Cambridge’s most famous locations including the Backs, the front of King’s College, Market Square and the Round Church, before finishing on Midsummer Common. A total of 4,500 runners have registered to take part.

Senior engineer Shaun Watson was one of the founders of the Cambridge Consultants team. “It started out with a couple of us wanting to run in the half marathon but word spread fast and the numbers soon grew,” he said. “I guess it has something to do with the friendly competitiveness of the employees here!

“It is great seeing groups head out at lunchtime to run together – everyone has found people with similar pace to run with, even though training in the freezing cold, wind and rain has been tough. The determination of the team is just awesome and it’s great that the company is supporting us by doubling the money we raise.”

Last year Cambridge Consultants staff set a new record with their charity fundraising efforts, raising £28,000 – including the company’s fund matching – for the Centre 33 Young Carers Project in Cambridge. The money was the result of activities including a monthly cake trolley, sales of bacon butties and regular raffles.

The EAAA is a helicopter emergency medical service that flies, night and day, 365 days of the year, covering Cambridgeshire, Bedfordshire, Suffolk and Norfolk. It does not receive any government funding – the £7.6m it needs to raise this year comes directly from charitable donations.