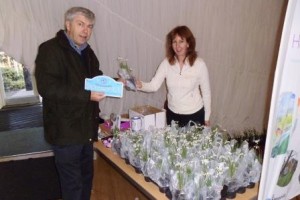 The Cambridge and District MG Owners’ Club held their 10th annual Snowdrop Run, a classic and vintage vehicle event, on Saturday 21 February 2015. The start was at Over Community Centre, Cambridgeshire and was in support of Headway Cambridgeshire.

Over 100 cars from all over the country followed a scenic route of 54 miles, starting from Over and going via the Cambridgeshire Fens and East Suffolk to the finish at Ickworth Park near Bury St Edmunds.

There were many cars from the 40s, 50s & 60s and one dating back to 1939. Some participants came from as far away as the Blackpool area. In addition to MGs, other makes of car were entered including Austin Healey, Daimler, TVR, Triumph, Jaguar, Mini, Ford, Lancia, Morgan, and Porsche.

Driving teams comprised the owner and their co-driver, who arrived at Over from 9.00 am for a light breakfast and to visit the Charity & Sponsors’ displays. Cars then set off from around 10.00 am to arrive at Ickworth Park from noon onwards. The event was supported by the MG Owners’ Club in Swavesey, and by Buckingham Stanley, Cambridge MG, who brought examples of the latest evolution of the marque, the MG3.

The Snowdrop Run was first held in its current form in 2006, after a club only event in 2005 turned out to be a huge success. The aim of the run is to have a great day out driving, an opportunity to show the cars, raise money for charity, and hopefully see some snowdrops too. This year, the charity the club chose to support was Headway Cambridgeshire, a local charity whose mission is to improve life after brain injury.

Headway Cambridgeshire staff were on hand to present a potted snowdrop to each team as they left for their drive and many of the participants took an interest in learning more about the charity that provides rehabilitation to adults with brain injury and support to their family and carers across the county of Cambridgeshire. Funds raised will be a big help to the charity in supporting people facing difficulties after a head injury.