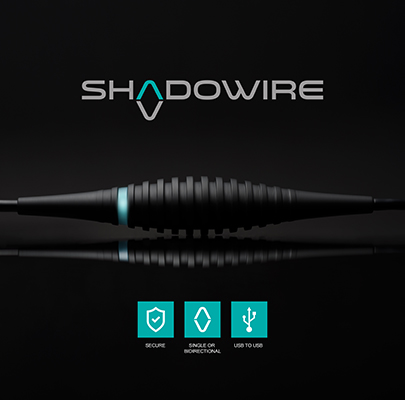 Innovative technology from product design and development firm Cambridge Consultants is set to take the risk out of transferring files between computers. No more worries about potential data loss if a USB stick is left behind on the train – or the havoc that could result if a virus is accidentally transferred to a corporate network.

The new Shadowire technology is different. It can be used to create what is, in effect, a double-ended USB stick – but the data it holds is only accessible for the duration of a transfer. Once you unplug it, the device appears clean. So you have the same convenience as a USB drive – no software or drivers, no passwords or PINs – but without the worry.

When you connect two computers using Shadowire, each computer sees it as a standard USB mass storage device. Data is stored encrypted using a per-session key – which is erased when the device is unplugged. As well as helping to prevent accidental data loss, this reduces the chances of malware infection – as does the fact that the receiving computer has to actively ‘pull’ the data from the device.

Existing secure USB drives, on the other hand, require a password or PIN to be entered each time the drive is inserted – a potential weakness if the password falls into the wrong hands or the device is hacked.

“Shadowire is the low-cost, effective, secure solution everyone has been waiting for,” said Jez Stark, head of networked systems at Cambridge Consultants. “Using a standard USB drive to transfer files is convenient, yet the risk it poses to an organisation is significant. Accidental data loss can incur commercial and, increasingly, legal costs. Malware infection is also a real threat.

“With the Shadowire technology, however, if you leave the USB device on the train you lose the hardware but, crucially, not the data. There’s no danger of a hacker gaining access to your data because the encryption key is only valid while the transfer is taking place. The data is rendered indecipherable once you unplug the device – and, the next time you use it, it appears as a newly formatted drive.”

The patent-pending Shadowire technology combines Cambridge Consultants’ security expertise with its skills in electronics, software, human factors and industrial design to provide a novel solution to a critical problem for businesses everywhere. The technology is available for licensing, with the bill-of-materials cost for the device expected to be less than $15 – cheaper than many existing secure USB sticks.

Cambridge Consultants is demonstrating the Shadowire technology – along with Pizzicato, the world’s first fully digital radio transmitter – at the Smartphone & Mobile Expo in Japan IT Week, May 13-15, at Tokyo Big Sight, stand E12-12.