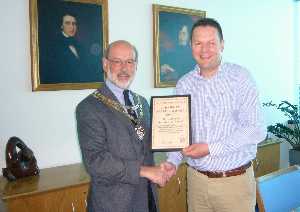 Johnson Matthey has received a Community Service Award to mark its contribution to the town of Royston and the local community.

The award was presented by the Mayor, Councillor Rod Kennedy.

He said "The Mayor has the privilege of being able to present Community Service Awards to those people and companies who the Mayor considers have made a valuable contribution to Royston.

"When this year's awards were presented at the annual town meeting, John Gourd was away on business and unable to accept his Award.

"I was very pleased to present John with his award as recognition of the major contribution John and Johnson Matthey made to establishing Royston First."

Johnson Matthey played a key role in establishing the Royston First Business Improvement District - not just in terms of funding, but also providing management support - John Gourd has been Chairman of the company since its formation. The company also supports many other community groups and clubs.

"We should all be proud that in Royston one of the world's major technology driven companies has its global headquarters and technology development and manufacturing centres," the Mayor continued.

"Johnson Matthey's prosperity is vitally important to our local economy and I thank them on behalf of the people of Royston for all the support they give to the town."

John Gourd, the company's Site Planning and Services Director said: "It was an honour to receive the award. Johnson Matthey is proud of its relationship with the local community and, through its charitable donations and efforts, endeavours to support as many organisations as it can.

"It is also pleasing to see the positive benefits that Royston First has brought to the town in its first year of operation and I would like to thank the Mayor for his support since the inception of the scheme."

Johnson Matthey is a leader in sustainable technologies. Many of the group’s products enhance the quality of life of millions through their beneficial impact on the environment, human health and wellbeing