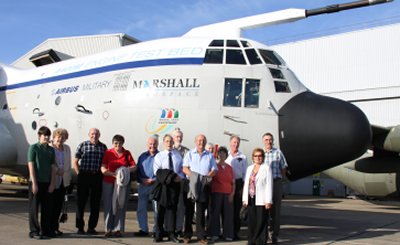 Around 180 retired Marshall employees and their guests visited Marshall of Cambridge last week for an annual reunion event. These retired employees, all members of 'The Marshall 30 Club' gained eligibility for membership of the Club by virtue of completing over 30 years of service.

In total, over 670 individuals have qualified for membership of the 30 Club. Between them, they have contributed almost 21,000 years of service to Marshall of Cambridge.

During their visit, members of the 30 Club were welcomed to the Company by Sir Michael Marshall and subsequently given a briefing on what the Company is doing today by Group Support Executive, Terry Holloway, before being taken on a tour of the Marshall Aerospace hangars.

Following this, members of the 30 Club were entertained by Freddie and Friends, a local jazz quartet, whilst they took refreshments and watched a flying display provided by Marshall Aerospace pilots using Cessna 172 training aircraft of the Cambridge Aero Club, together with an Extra 200 aerobatic aircraft.

Sir Michael Marshall said:  “It was an enormous pleasure to welcome members of the 30 Club to Cambridge for their annual visit and we were delighted by the huge interest the members took in the Company and its activities today”.

The Chairman of the Marshall 30 Club, Mr John Arnold, who lives in Teversham and who had completed over 50 years working for Marshall of Cambridge, said:   “It was a very enjoyable visit and as this was the first occasion that members had got together this year, it was a real pleasure for members of the 30 Club to congratulate Sir Michael Marshall on his Knighthood in the New Year’s Honours List."