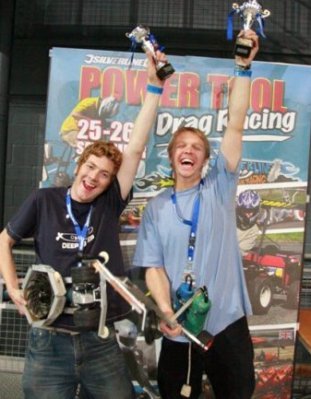 The competitors use handheld power tools such as belt sanders, angle grinders and even circular saws to power dragsters at record speeds at the event, held last weekend at Fleet Air Arm Museum, Somerset.

Simon Jelley [pictured left] and Mark Mellors [right] spent their weekends and lunch-breaks coming up with two innovative designs for non ride-on dragsters that completed the 20 metre indoor course from a standing start in just over two seconds. The race has been won for four years running by John Reid, who had to up his game this year when he saw 42T’s designs in the qualifying rounds [see tinyurl.com/powertooldragracing for a clip of the final race]. John won with a margin of just 0.08 seconds but Simon and Mark from 42T are now so hooked on this engineering challenge that they already plan to return in next year’s ride-on category.

And the secret of their success? “Lots of contestants believe that more power must be better whereas we took a systems design approach considering power, weight and grip. We specifically chose lightweight tools and pre-heated the tyres but also came up with a championship first: a design incorporating a downforce vortex fan to literally suck the dragster down to the ground and further improve its grip,” said Mark Mellors of 42T.