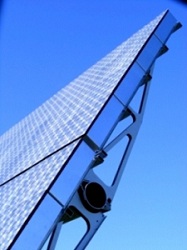 Circadian Solar is one of Europe’s leading developers of concentrated photovoltaic technology (CPV).

The new modules are now undergoing further testing and field trials with the aim of delivering grid parity from large-scale solar farms in desert or sunbelt regions, without needing government or other subsidies: in others words, generating electricity at costs equal to or lower than the grid power produced from coal or gas-fuelled power stations.

42T’s engineering team, drawn from its own in-house resources as well as specialists from its network of associates, worked closely with Circadian Solar’s technical experts to improve the energy-conversion efficiency and reliability of existing module designs. The combined team generated a number of new concepts – based on a Fresnel lens array, optics to optimise the solar performance and high technology photovoltaic cells – but also considered the manufacturing requirements to ensure the modules could be produced in high volume at low cost. The designs were then further developed and prototyped for detailed laboratory and field trials.

In addition, the combined team developed a mathematical model to take a total systems approach to the design and operation of large-scale farms. The model factors in all the inter-dependencies, technical and operational challenges influencing the cost of energy produced throughout the lifetime of a farm such as: land use; tracking systems to maximise the light capture; servicing, failures and degradation; and module concepts, materials and manufacture.

“42 Technology’s expertise in design for manufacture, systems engineering and knowledge of the cleantech sector has helped significantly shorten our product and system development timescales. By pooling our resources we are now much closer to producing a new generation of high efficiency, low cost solar collectors in volume and in developing large-scale farms offering potentially much lower energy costs than any of today’s current installations,” said Jeroen Haberland, CEO of Circadian Solar.