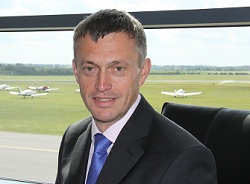 Cambridge Airport has announced the appointment of Richard Knight, from the UK Defence Academy, as Airport Manager effective 23 May.

In his new role Richard will take responsibility for all facets of the airport’s operational infrastructure including security, fire, fuel, training services, FBO management and general airport operations. He will also have responsibility for managing the complex logistical preparations necessary to support the anticipated traffic increase expected from the Olympics and growth in civilian movements. He will report to Airport Director Archie Garden who has developed an impressive management team to implement the new commercial strategy for the airport since joining in January.

At the Defence Academy Richard was responsible for training and mentoring senior
military commanders across a wide range of topics. He first joined the RAF as an
apprentice and after three years he underwent officer training at RAF College
Cranwell. Once commissioned he trained as a navigator on the Tornado F3,
accumulating over 2,000 flying hours’ on the type. He saw active service in The
Balkans and Middle East and also served three years with the Royal Marines.

After a period working in the Ministry of Defence, Richard was appointed Executive
Officer of 25 Fighter Squadron in 2003, where he returned to flying the Tornado F3
and had the opportunity to lead the unit, both in the UK and overseas on military
operations. Two years later he moved to High Wycombe to provide operational
support to UK and overseas air operations. Here he was instrumental in the growth
and development of the RAF’s contribution to the UK’s capabilities against 9/11 type
threats, an experience that saw him become an expert advisor to the government
during national emergencies.

Having completed an MBA from Bath University, Richard was given command of the
Falklands’ Mount Pleasant International Airfield during 2008. Responsible for
managing the airport, and all associated services Richard drove and led a number of
high profile initiatives that saw significant improvements in capability and operational
outputs. The role also involved managing a disparate array of contractors, military
and civilian workers to achieve common goals. His achievements and leadership
skills resulted in his appointment as an Officer of the Order of the British Empire
(OBE) in the 2010 Queen’s Birthday Honours list.

“Cambridge Airport has evolved significantly since the first quarter of 2011 and we
are pleased to appoint an airport manager who understands the need to manage
change, develop new business, understands commercial activity and most
importantly run the airport in a safe, secure and co-ordinated manner. Richard’s
extensive experience, his genuine passion for aviation and capacity to bring teams
together, make him the perfect appointment for the airport,” says Archie Garden.

Richard said of his new management role, ”having spent a significant part of my
career working within the military and civil service, the appointment at Cambridge
Airport gives me the opportunity to combine my operational knowledge and
leadership skills within a commercial environment. With Cambridge Airport’s goal to
become the aviation hub for the East of England this is an excellent time to be joining
the team and I look forward to contributing to its growth,” said Richard.

Cambridge Airport primarily targets the east of England market with a strong focus on
Cambridge and its business, academic and industrial communities with an estimated
700,000 people living within the direct catchment area and another 800,000 living
within an hour’s drive of the airport.

A strong provider to the equine community Cambridge Airport is 10 miles from
Newmarket and offers regular services for the transportation of horses.
Cambridge Airport is home to a variety of aviation service providers including charter
operator Marshall Executive Aviation, MEA which operates a Cessna Citation Bravo
and Citation XLS as well as a Bombardier Challenger 300.

Other aviation companies include Capital Air Services and several GA flight training
operators. It is also home of the East Anglian Air Ambulance service operated by
Bond Helicopters. A fully authorised Cessna Service centre is located at the airport.
www.cambridgeairport.com