New generation to step up at Marshall 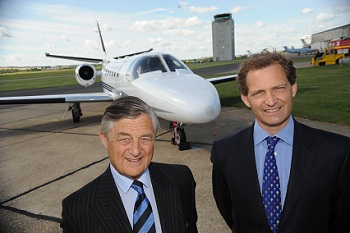 Sir Michael Marshall, Group Chairman and Chief Executive of the Marshall Group of Companies, one of the UK’s leading family-owned companies, has announced that in 2012 he will be dividing the responsibilities of this dual role, reflecting the substantial growth of the Group in recent years, where annual sales have now reached £1bn.

From January next year, his son Robert Marshall will be taking on the role and duties of Group Chief Executive, working alongside Sir Michael who will remain as Executive Chairman.

Robert Marshall joined the family business in 1994.  Sir Michael Marshall has held the combined role of Chairman and Chief Executive since 1990 and is proud to have led the Company’s growth during that period and to have seen it celebrate its centenary in 2009.

Making the announcement about Robert’s forthcoming appointment Sir Michael Marshall said: “I am delighted that Robert will be taking on this responsibility for the Group and that he will be working with me, continuing our family’s close involvement with the day-to-day running of our businesses, through the Chief Executives, over 4 generations.  We are enormously proud of what we have achieved over the last 102 years and look forward confidently towards the future.”

The Marshall Group, which started out as a small chauffeur drive business in Cambridge, has grown to become a well respected name in the motor retail, aerospace and vehicle engineering industry sectors, with 4,500 staff employed across the UK and in offices around the world.

Speaking about his new appointment, Robert Marshall said: “It is a privilege to have the opportunity to continue the family tradition and to follow in the footsteps of my father, grandfather and great-grandfather.  By holding to the core values on which we have built this business and by remaining independent, we have managed to modernise and adapt in each of our core businesses over the years to be in a position to take advantage of the many opportunities which have come our way.”

Sir Michael Marshall CBE DL took the helm of his family’s diverse group of businesses in January 1990, following the retirement of his father Sir Arthur Marshall OBE DL, who had in turn succeeded his father, David Marshall MBE in 1942.  Robert Marshall was educated at Eton and at Cambridge University, where he gained a First Class Degree in Engineering from Pembroke College.

The Marshall Group of Companies (www.marshallgroup.co.uk) was founded by David Marshall on 1st October 1909 as a small chauffeur drive business and now comprises 4 main businesses:

Marshall Motor Group, (www.marshallweb.co.uk) led by Chief Executive Daksh Gupta, has taken advantage of the recent challenging economic conditions to grow the business through selected acquisition and has added 27 new businesses to the group since January 2009.  The group now has 67 franchised dealer businesses representing 28 manufacturer brands from Cumbria, Lancashire and Yorkshire in the north to Buckinghamshire and Hert5fordshire in the south.  All of these acquisitions have been funded entirely by cash generated in the existing motor businesses.  With over 2,000 employees, Marshall Motor Group is the second largest privately-owned dealer group in the UK. Marshall Leasing is subsidiary of Marshall Motor Group and manages a fleet of 5,000 vehicles on contract hire and fleet management for a number of blue-chip companies.

Marshall Aerospace (www.marshallaerospace.com) is led by Chief Executive Steve Fitz-Gerald.  Marshall Aerospace (MA) is the United Kingdom’s leading independent aerospace company and is renowned and respected for its quality-of-service, engineering excellence, flexibility and reliability.  MA uses its engineering expertise and proven programme management skills to deliver best-in-class, cost-effective and innovative solutions that add value to its customers’ activities. The Company is an independent service provider - specialising in the conversion, modification, maintenance and support of aircraft - and its capabilities include: engineering design, manufacture and test; and the provision of personnel, training and consultancy.  It also has one of the largest aerospace engineering teams in the UK - covering all aspects of design, test, certification and support, in civil and military regulatory environments - and recognised for its innovative solutions and ability to deliver on-time and to-cost.  Marshall Aerospace holds many type approvals - granted by national and international authorities, airlines, airframe manufacturers and defence agencies – enabling the company to design and certify modifications on a number of commercial and military platforms.

Cambridge Airport (www.cambridgeairport.com) is headed by Airport Director Archie Garden. Cambridge Airport primarily targets the east of England market with a strong focus on Cambridge and its business, academic and industrial. It is also a strong provider to the equine community as it is just 10 miles from Newmarket and offers regular services for the transportation of horses.  Cambridge Airport is home to a variety of aviation service providers including charter operator Marshall Executive Aviation (MEA) which operates a Cessna Citation Bravo and Citation XLS as well as a Bombardier Challenger 300.  Other aviation companies include Capital Air Services and several GA flight training operators. It is also home of the East Anglian Air Ambulance service operated by Bond Helicopters.  A fully authorised Cessna Service centre is located at the airport.