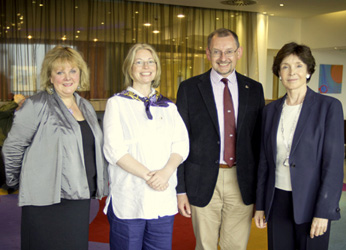 Cambridge company RealVNC is a proud sponsor of this year’s Cambridge Summer Music Festival and is the exclusive sponsor of what will be a sensational finale performance on 6th August.

With the festival in full swing, many Cambridge residents and visitors have already enjoyed some of the wealth of classical music performances hosted at magnificent venues around the city. The festival’s finale, to be held at the West Road Concert Hall, will feature two of opera’s brightest British stars, Dame Felicity Lott and Sir Thomas Allen, as they sing favourite Lied, songs from the shows and operatic arias and duets, in an evening that promises to enchant.

RealVNC is enjoying a very successful year, securing an unprecedented third Cambridge News Business Award for Excellence in as many years. The company also recently received two prestigious Queen’s Awards for Enterprise in recognition of its accomplishments in the areas of Innovation and International Trade, a unique double this year.

RealVNC is a very active member of the local community and will also be sponsoring the recently announced Cambridge News Community Awards 2011 for the second year. Last year’s awards saw a host of Cambridgeshire’s local heroes recognised for their significant achievements and contributions to the community, this year promises to be no less remarkable.

“We are a company that in spite of recent economic challenges continues to perform very well and I am delighted to be able to support some of our city’s most culturally exciting events and deserving community awards.” said Lily Bacon, Executive Vice-President, RealVNC.

“The Cambridge Summer Music Festival relies on the kind and much needed support of all our sponsors. It is this help that enables us to put on such a magnificent programme. Our thanks and appreciation goes to RealVNC for their generous contribution.” said Juliet Abrahamson, Director.

About RealVNC
RealVNC’s software solutions are used by hundreds of millions of people in both desktop and mobile platforms for remote access and control. VNC is used widely in hundreds of different applications, from helpdesks to virtualization. RealVNC’s commercial products have been shipped to customers in all sectors throughout the world.

RealVNC also works with many OEM partners to license VNC technology for inclusion in their product or service and is the only organisation offering a commercial license to embed remote access capability in third-party products and offerings.

RealVNC was founded in 2002 by the original developers of VNC to promote, enhance and commercialize VNC.