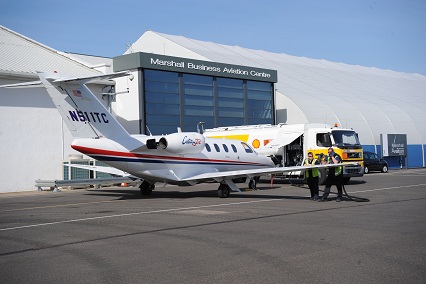 Cambridge Airport, the East of England aviation hub, is marking a successful first six months following its implementation of a new commercial strategy.

With a new dedicated airport management team in place, the airport has developed its business aviation movements year on year by 18%, fuel sales are up by 41% and it has seen a jump in parking fee revenue of 50%. Instrument approach training flights have also grown – now currently showing a 5% rise year on year.

The airport has seen its biggest growth area from new brokers, operators and private owners with a significant number of charters originating in France and Germany. “Newmarket Race Course continues to bring us business and we are observing  significant spikes in executive jet and charter helicopter flights on race days,” says Archie Garden, Airport Director. Increased business movements have been complemented by a growth in Air Ambulance flights with patients heading to renowned local hospitals Addenbrookes, which recently opened a new trauma unit, and Papworth.

“We have been promoting our specific benefits which include 24/7 capability with no slot restrictions; proximity to the City of London as well as the local academic, industrial and scientific communities of Cambridge; and uncongested airspace making us an attractive option for those wanting to avoid busy London skies,” explains Garden.

The airport will be aiming to implement a number of significant initiatives before the end of the year. A franchised FBO will be confirmed in the 4th quarter; the GPS approach system will be going live in September which will consolidate the training offering; and having taken responsibility for Cambridge Aeroclub the airport is concertedly developing a GA centred community. “The airline sector is also within our sights as we continue to establish relationships with commercial airlines to develop city-hopper services between European cities,” says Garden.

Supporting the business aviation infrastructure growth Cambridge has also recently made available significant hangar space on either side of the airport’s FBO. The hangars which were previously occupied by the long established Cessna Service Centre, which has moved to another location on the airport, offer heating, air conditioning and potential for office space. “We anticipate an operator will move into this premium location shortly and are already in advanced talks with a number of businesses,” commented Garden. A network of aviation representatives including Northpoint Aviation has also been instigated which will support communicating key benefits to charter users and travel arrangers in conjunction with the airports business development team.

Cambridge Airport is hosting this year’s Business and General Aviation Day, BGAD2011 on September 20th and will be attending NBAA 2011 in October. Booth number N1622

With a 1965m/6447ft runway 1965m/6447ft runway accepting aircraft up to Boeing 757 or Airbus 320 it is suitable for intercontinental business jets as well as small cabin aircraft.  It boasts CAA Category 7 Fire & Air Traffic Control status and has full navigational aids and communications, which include radar approach coverage up to 13nm.  It has invested in a new GPS approach to complement its ILS system.

Cambridge Airport primarily targets the east of England market with a strong focus on Cambridge and its business, academic and industrial. A strong provider to the equine community Cambridge Airport is 10 miles from Newmarket and offers regular services for the transportation of horses.

Other aviation companies include Capital Air Services and several GA flight training operators. It is also home of the East Anglian Air Ambulance service operated by Bond Helicopters.  A fully authorised Cessna Service centre is located at the airport.