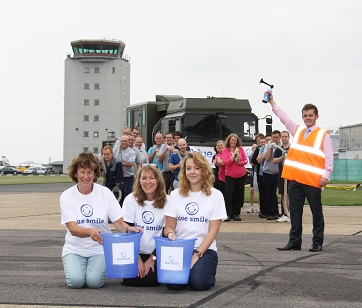 The Marshall of Cambridge Young Persons Group organised a Truck Pull on the Cambridge Airport on Wednesday 24 August to raise money for the Charity Blue Smile.

Five teams, each with six individuals – all Marshall employees – competed against each other by pulling a British Army MAN Support Vehicle Truck, which has been manufactured by Marshall Land Systems.  This massive Army Truck, which weighs an amazing 50 tonnes, was pulled 100 metres in a timed race between the teams in order to raise much needed funds for Blue Smile.

Blue Smile is a relatively new Cambridgeshire Children’s Charity that provides counselling and therapy for pupils in schools between the ages of three and 13 during a critical window of opportunity for change.  Blue Smile was chosen by the Marshall Young Persons Group as their Charity of the Year and so far they have raised almost £3,000 for the Charity as a result of teams running the 3 Peaks Challenge – which raised over £2,000 and a charity cricket match, which raised £250.  It is hoped that the Charity Truck Pull has raised approaching £1,500 and the balance of their target of £5,000 will be achieved at a quiz night in the autumn.

The Chairman of the Marshall Young Persons Group, Greg Nunn, said: ‘This Truck Pull was a great opportunity to showcase the Airport and to publicise this wonderful charity Blue Smile which is new to the area.  The work they do in supporting young children is really tremendous.  As well as raising money for the charity, we had a great time, cheered on by a large crowd of our fellow employees!’

Sir Michael Marshall, Chairman and Chief Executive of Marshall of Cambridge (Holdings) Ltd said: ‘We are enormously proud of all of our employees and the tremendous work they do in the many communities in which our businesses are based.  It is particularly appropriate that the young employees of Marshall of Cambridge have chosen this particular charity, which does so much good for young children in the local region.’