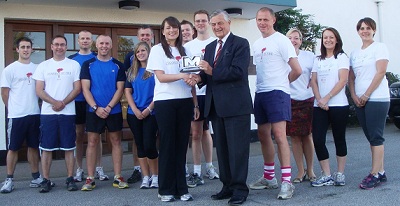 The Marshall Trophy is presented each year to the fastest team from Marshall of Cambridge completing the course and this year the fastest team was the Marshall Aerospace ‘Awesome Team’, which was a mixed team which completed the race in 1 hour 10 minutes and 45 seconds.

Sir Michael Marshall said: ‘I am delighted that so many Marshall Runners took part in this wonderful race.  The Company has a very proud record of supporting this race, with its strong links to the 1924 Olympics in Paris – immortalised by the film Chariots of Fire – in which my father was one of the runners’.