New route announced for direct flights from Cambridge to Jersey 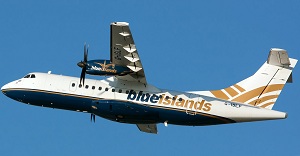 Jersey-based C.I. Travel Group today announces the launch of a new air route from Cambridge Airport to Jersey, linking the famous university city with the island for the first time since 2006.

The service will operate every Saturday between May 12th & September 15th 2012 from Cambridge Airport, which is located just three miles from Cambridge city centre and is ideally located for access to the A14 corridor and the south east Midlands – in total a population of almost 2 million are within a 60 minute drive of the airport.

Cambridge Airport primarily targets the east of England market with a strong focus on Cambridge and its business, academic and industrial sectors. The airport is ideally positioned for easy access to the City of London with just under an hour’s the drive to Canary Wharf and the East of London, the location of the key Olympics venues.

Operated by Channel Islands-based Blue Islands using a 48 seat ATR-42 aircraft, the route will be sold exclusively by C.I. Travel Group’s well-established consumer brands that include Airways Holidays, Discover Jersey and JerseyTravel.com. The route will also be available to Jersey hoteliers wishing to offer their own clients from the Cambridge area a direct flight to the island.

Jersey is the largest of the Channel Islands – a British Crown Dependency – and boasts an unrivalled sunshine record compared to any point in the United Kingdom, with an average of 1.912 hours of sunshine every year. The island nestles exactly 100 miles south of the British mainland and just 14 miles from the coast of Normandy and as such offers a somewhat continental ambience and warm, welcoming atmosphere by the almost 100,000 friendly Jersey inhabitants. The island’s capital, St Helier, is a cosmopolitan blend of old and new, with excellent shopping, a scenic harbour and waterfront and the famous Elizabeth Castle – accessible at low tide by a causeway – as well as a thriving restaurant scene with Jersey being renowned for its fine cuisine and enormous range of culinary expertise.

The island is fringed with breathtaking scenery, from tranquil coves to wide sandy beaches that offer fun for all the family, as well as many diverse attractions and perhaps its famous historic monument, the castle of Mont Orgueil overlooking Gorey Harbour. A spectacular array of annual events on the island include the famous Battle of Flowers floral parade and popular Jersey Air Display during the summer months, but include many festivals of food, film, music, art and even cider making.

‘We are delighted to have concluded negotiations for the launch of a new service from Cambridge for the summer. Many people are getting pretty tired of the queues, hassle and delays at the big airport hubs and with a distance of less than 100 metres from the front door of the terminal to the aircraft steps, the Cambridge experience will be much more relaxed. We also see that many more UK holiday-takers are deserting the Euro-zone in favour of a holiday closer to home, and therefore believe that this new route will prove to be popular with both new and existing clients in the Cambridge area,’ commented Robert Mackenzie, Managing Director of C.I. Travel Group.

David de Carteret, Director of Tourism, welcomed the announcement of the new service. ‘C.I. Travel Group’s initiative is welcomed by everyone in Jersey’s tourism industry as this opens up an excellent opportunity for the island to market itself to a community that can now put Jersey on their shopping list as a very convenient and attractive option. We look forward to working together to secure a successful first year of operation.’

Cambridge Airport’s Airport Director, Archie Garden commented, ‘We are delighted to welcome the introduction of this new service to Jersey. Cambridge Airport is working hard to re-introduce scheduled services to the community in an around the city. The opportunity to fly from a local airport and avoid the stress of flying through a busy airport such as Stansted is increasingly popular. We look forward to working with C.I. Travel Group and local travel agents to ensure this route is a success.’

C.I. Travel Group was founded 27 years ago and is the largest specialist operator to the Channel Islands. The company offer a wide range of short breaks and holidays to both Jersey and the other islands marketed under the brand names of Discover Jersey & Guernsey, Airways Holidays and JerseyTravel.com.

Blue Islands are a Guernsey-based airline, operating a number of scheduled services between the islands, the UK & Europe. The ATR-42 500 aircraft has a fast cruising speed and will complete the journey between Cambridge and Jersey in just over an hour.

Cambridge Airport primarily targets the east of England market with a strong focus on Cambridge and its business, academic and industrial sectors. The airport is ideally positioned for easy access to the City of London with just under an hour’s the drive to Canary Wharf and the East of London the location of the key Olympics venues.

With a 1965m/6447ft runway accepting aircraft up to Boeing 757 or Airbus 320 it is suitable for intercontinental business jets as well as small cabin aircraft. It boasts CAA Category 7 Fire & Air Traffic Control status and has full navigational aids and communications, which include radar approach coverage up to 30nm. It has invested in a new GPS approach to complement its ILS system.