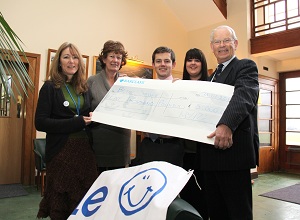 2011 was ‘The year of the Blue Smile’ for the Marshall Young Persons Group as they took on this fledgling charity as their charity of the year, setting themselves a target to raise £5,000.

Events organised included a T20 cricket match, taking on the Three Peaks Challenge, a truck pull on the Cambridge City Airport runway, competing in the Great North Run and a Christmas quiz. It is hoped that the cricket match will become an annual event.

Greg Nunn, Chairman of the Marshall Young Persons Group said: ‘The fundraising team were delighted to achieve their target figure, thanks to the support and enthusiasm of many colleagues, friends and family, thus providing vital funds for the first-year charity where every penny really does count.’

The £5,000 raised for Blue Smile brought the Marshall Young Persons Group’s fundraising total to over £20,000 since forming in 2008 – a great achievement for all.

Terry Holloway, Group Support Executive of The Marshall Group of Companies said: ‘The Marshall Young Persons Group worked tirelessly throughout the year in order to promote awareness of Blue Smile and to raise this significant amount of money for the charity. It is a great pleasure to be handing over a cheque for £5,000 to Amanda Langford and Annabel Brunner of Blue Smile. We are extremely proud of all our employees throughout the Company for their tremendous work in helping to raise this money in support of such a good cause.’

Blue Smile provides one-to-one counselling and therapy in Cambridgeshire schools to support and improve the emotional wellbeing of children and young people aged 5 to 13. The scheme is aimed at vulnerable children with mental health issues, to allow them to lead a happier and healthier childhood.

About Marshall of Cambridge