70th Anniversary of the Tiger Moth at Cambridge Airport 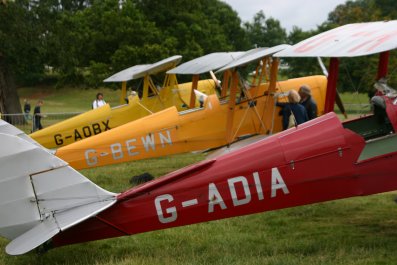 To celebrate this significant milestone, which it is thought few, if any, other airfields could emulate, a number of Tiger Moth aircraft will be flying into Cambridge Airport arriving at 10.30am on Saturday 26 January.

Tiger Moth “specialist” Henry Labouchere who is based at Langham in North Norfolk, where he maintains Tiger Moth aircraft, will be providing a display of aerobatics in his Tiger Moth. In 1968 Henry flew his Tiger Moth to Australia and back.

The two resident Tiger Moths of the Cambridge Flying Group will be on display and will provide flights for selected VIPs. One of these will include Mr Michael Marshall, Chairman and Chief Executive of Marshall of Cambridge Holdings Ltd who completed his private pilot's licence on a Tiger Moth aircraft in 1949. Mr Michael Marshall last flew a Tiger Moth, one of seven operated by the then Marshalls Flying School, on 25 May 1957. He will be making his flight with Bill Ison, Chief Flying Instructor of the Cambridge Flying Group who celebrated his 87th Birthday on 4 January 2008; the two pilots and aeroplane between them have a combined age of 233 years!

Hot soup and hot dogs will be provided to warm the pilots of these open-cockpit by-plane aircraft, and also spectators!

The first Tiger Moth aircraft to be based at Cambridge arrived on 26 January 1938 as part of an initial RAF establishment of six Tiger Moth aircraft for No 22 Elementary and Reserve Flying Training School. Marshall of Cambridge went on to train over 20,000 pilots on Tiger Moths during the course of World War II at its Cambridge site and satellite airfields at Bottisham, Caxton Gibbet, Cliff Pippard (in Wiltshire), and operated a fleet of over 200 Tiger Moths.

Bill Ison (87), Chief Flying Instructor of the Cambridge Flying Group had his first flying experience in a de Havilland 60 Gipsy Moth (an aircraft which pre-dated the Tiger Moth) with Sir Arthur Marshall in 1934.

In 1939, companies operating RAF volunteer schools had becoming increasingly concerned about their future in the event of war being declared. Two days before the declaration of war, Sir Arthur Marshall received a confidential phone call telling him that if war was declared the RAF School at Oxford (which was being operated by Marshall of Cambridge) was to close with all the aircraft being transferred to Cambridge without delay. Detailed instructions were contained in a sealed envelope which was delivered to Sir Arthur Marshall’s personal custody by despatch rider with strict instructions that the envelope was not to be opened unless war was declared.

With all civil aircraft grounded in the run up to the declaration of war, the Air Ministry had given Sir Arthur Marshall authority to use an RAF Tiger Moth when available for his personal transport between Oxford and Kiddlington and he flew to Kiddlington with the sealed envelope on the morning of Sunday 3 September and was in the air in a Tiger Moth at 11.00am when the Prime Minister made the announcement that Great Britain was at war with Germany.

During World War II, because of the risk of bombing, Marshall of Cambridge was instructed to park all Tiger Moth training aircraft around the airfield in dispersed flights. Each flight had its own garden shed type office and all flying, training and day to day servicing of the aircraft was carried out in the open at the individual flight locations. Refreshments were sent out from the central canteen to those flights and to the hangars and workshops.

The 1939/40 winter was very severe and many of the Tiger Moths were seriously damaged in a blizzard. One broke away from its picketing and ended up wrapped around a telegraph pole on the opposite side of the Newmarket Road. Retired Marshall flying instructor Wing Commander Herbert “Tap” Tappin, before his death, recalled that when flying instruction was not possible, parties of student pilots were organised to play ice hockey on the frozen sewage works at Milton!

Wing Commander Herbert (Tap) Tappin instructed a number of pilots on Tiger Moths at Cambridge in 1939 and 1940 which particularly included Group Captain Leonard Cheshire who went on to win the Victoria Cross and found the Cheshire Homes, and Air Marshal Johnnie Johnson who became the top scoring fighter ace of the Second World War.

The Tiger Moth was a basic training aeroplane. However, Marshall of Cambridge was instructed to fit bomb racks to eight Tiger Moths to carry 8x20lb anti-personnel bombs under each wing for use against invasion forces in 1940. This modification was known as the “Banquet Light Scheme”. The plan was that the Tiger Moths would fly just above ground level until the enemy was identified and then climb to 800’ and dive bomb down to 500’ to release the bombs, before, hopefully, returning home. With no dummy bombs available in 1940, practice attacks were carried out with the aircraft flown from the front cockpit by instructors and house bricks were thrown over the side from the rear cockpit. However, it was discovered that the bricks fell faster than a diving Tiger Moth, risking catastrophic damage to the propeller! An instruction was therefore given to eject the bricks forcibly away from the aircraft!!

Flying instruction was conducted by night as well as by day, and at the peak of the war effort dozens of Tiger Moths could be seen in the air at any one time and they were often referred to locally as “Marshall’s Messerschmitts”. During night flying the training aircraft were sometimes fired on by German intruder aircraft and often the crew did not know they had been shot at until they landed and bullet holes were found. One Tiger Moth was shot down from Caxton Gibbet in 1941 with the loss of the pilot and his pupil.

Top scoring pilot, Johnnie Johnson in his book Wing Leader said “Marshalls gives a good start – no doubt about that – a first class start, I spent nearly four months at Cambridge and succeeded in achieving 84 hours 45 minutes Tiger Moth experience before moving on to Spitfires.”

After basic flying training, by day and by night, RAF pilots were trained to fly operational aircraft and those going on to fly bombers would invariably fly by night only. In 1941, Sir Arthur Marshall suggested that those pilots who were going on to fly bomber aircraft should only be taught to fly at night and not do any daylight instructional flying at all!

Six student pilots were selected as an experiment to learn to fly only by night. They arrived at Cambridge on 3rd January 1942 and on average went solo after 16 hours' dual instruction. The experiment was a great success, but was unique because it was not adopted universally. However, interestingly, all six of those pilots trained by Marshalls to fly by night only went on to bomber aircraft and all survived hostilities throughout the War.