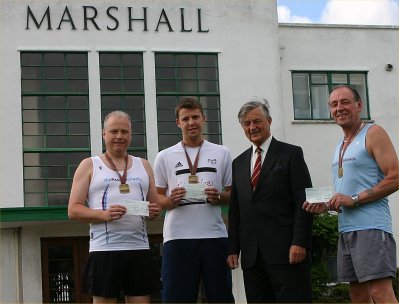 Five employees of the Marshall Group of Companies were each presented with a cheque for £250 by Mr Michael Marshall, Chairman and Chief Executive of Marshall of Cambridge Holdings Ltd, as a contribution to the charities they were supporting when they recently ran in the London Marathon.

Pictured with Mr Michael Marshall are (from left to right) Daniel Edwards of Marshall Specialist Vehicles who raised over £1500 for Muscular Dystrophy, Gary Stacey of the Marshall Motor Group who raised a similar amount for Keech Cottage Children’s Hospice and Geff Walker who raised £2,200 for Kids Kidney Research. Gary was running his first marathon which he ran in five hours two minutes.

Mr Michael Marshall said: 'Marshall of Cambridge is very proud of its participation in a wide range of community events, and it was wonderful that five of our employees were able to take part in the London Marathon, between them raising over £7,000 for very worthwhile charities. The Company is delighted to make a financial contribution to each of these charities to top up the amounts raised.'

Two other runners missing from the photograph were Len Scrase of Marshall SV who put up the fastest time of the Marshall runners, coming home in three hours three minutes, narrowly ‘pipping’ Graham Moore who also finished in three hours, three minutes and 42 seconds. Len and Graham are veterans of the London Marathon and were raising money for Marie Curie and the Bobby Moore Bowel Cancer Fund respectively.