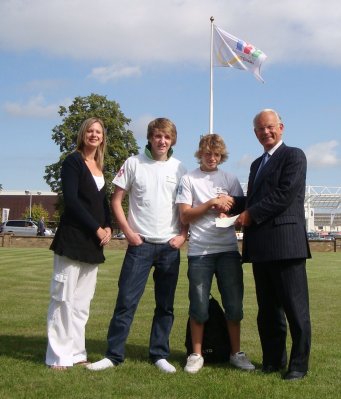 Marshall of Cambridge supports sponsored youth bike ride from Ely to Hunstanton and back.

Ben Norris and his friend Harry Atkinson, who are both members of the City of Ely Youth Council, organised a sponsored bike ride from Ely to Hunstanton and back over two days totalling 106 miles, which took place on 4th and 5th July.

There were seven riders in total ranging from the age of 13 – 15 together with one adult and the cycle ride took just over five hours each way, which is a remarkable achievement considering the age of the riders and the distance. As a group, they collectively raised around £1,000 which will be used to purchase a war memorial plaque to be put on the War Memorial in Ely in remembrance of all those who lost their lives from World War II to the present day. A donation will also be given to the Children’s Hospice.

Ben Norris’ mother, Adrienne Tuck, works for Marshall Specialist Vehicles in Cambridge as a member of the purchasing team and in recognition of her son’s achievement, Group Support Executive from Marshall of Cambridge, Terry Holloway, presented a small cheque to Ben to top up his funds. The photograph shows from left to right Adrienne Tuck, Harry Atkinson, Ben Norris and Terry Holloway.

Terry Holloway said “We are very proud of our employees and their families who play such an active part in the local community. The cycle ride was a magnificent effort on the part of Ben and his friends and the Company was delighted to provide some additional money towards their fundraising.”

Ben Norris is the Chairman of the City of Ely Youth Council and attends the City of Ely Community College. He is also a member of the Cambridgeshire Army Cadet Force – Ely Detachment. In his spare time he enjoys bike riding with his friends, motocross, skateboarding, rugby and many other outdoor activities. A highly talented young man, he lives with his mother in Littleport.