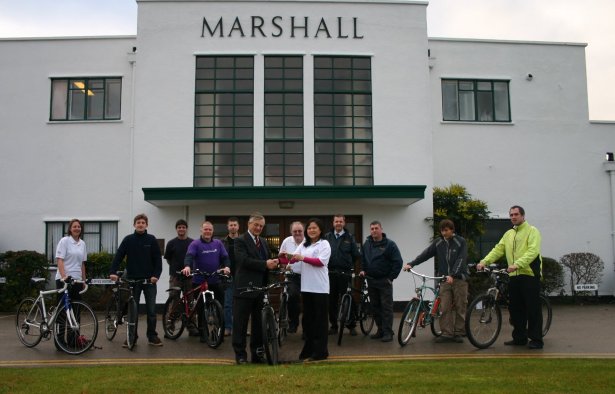 The inspiration behind the Marshall participation in this annual bike event is Athena Wu, an engineer working in the Marshall Aerospace Design Office.  2008 was the tenth year that Athena Wu had arranged the race within the Group of Companies.  In 2003 sixty seven riders took part and with one hundred riders in 2008 this is the largest number to have taken part during the ten year period.  Around £40,000 has been raised for Breakthrough Breast Cancer during this period.

Athena Wu said: I learned to ride a bicycle in 1996 during my placement year from university with Marshall Aerospace – somewhat later than most British people –with the help of various colleagues who encouraged and occasionally laughed at me.  I am not sure what compelled me to organise this as a team event, rather than just quietly taking part myself, but one of the factors might be that some of my colleagues had seen me falling off my bike saying ‘I have got to see this for myself!’

The trophy was handed over to Athena Wu and many of her team of 100 cyclists by Mr Michael Marshall and Katie Arkle of Breakthrough Breast Cancer outside the Control Building of Marshall of Cambridge last Friday (5 December).

Mr Michael Marshall, Chairman and Chief Executive of Cambridge (Holdings) Ltd said: I am enormously proud of the enormous contribution the Company and our many employees make to community activities and charities.  This annual bike ride has become an important part of our fundraising activities and we are delighted that Athena Wu and her team have gained the top trophy from Breakthrough Breast Cancer.

Mr Chris Askew, Director of Fundraising for Breakthrough Breast Cancer said: I understand that over 100 riders took part from Marshall Aerospace and I wanted to say a personal thank you to all of you for your hard work; raising this amount is a fantastic reflection of all your efforts.  Thank you again for all of your support.  I do hope that you have enjoyed this year’s bike ride and we hope to see you at the ride in 2009!  It is through dedicated supporters like yourselves that we are able to reach our vision, a future free from the fear of breast cancer."