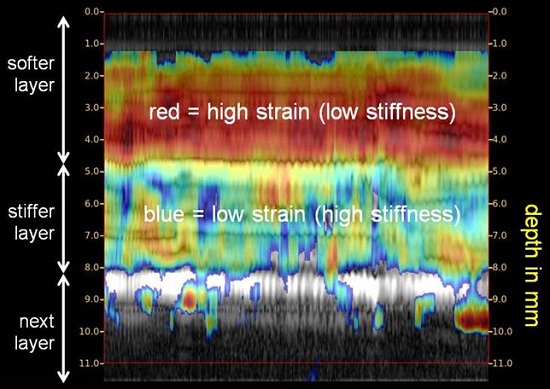 A new passive approach to strain imaging for soft tissue could improve the treatment of cancer and atrial fibrillation.

The Technology Partnership plc (TTP), a leading UK-based research and product development company, has made major advances in the use of elastography, a medical imaging technique that maps the elastic properties of soft tissue to provide vital diagnostic information during surgery. The new breakthrough could be used for surgical processes such as treating abnormal heart rhythms caused by atrial fibrillation, killing or removing cancerous or damaged tissue, or simply navigating around the body during an operation.

Surgeons currently work with ‘blind’ instruments, so cannot see into lesions and have to rely on their skills to avoid damaging nearby organs when performing processes such as resection or ablation. Elastography is an imaging technology that determines the stiffness of tissue and can be adapted to measure the level of muscle contraction. For example, cancerous tumours will often be palpably stiffer than the surrounding tissue and diseased livers are stiffer than healthy ones.

Traditional elastography relies on creating displacement in the tissue by inducing a distortion by sending a shear wave through the tissue or by vibrating the surface of the tissue. However, TTP’s patent-pending approach uses a process of Passive Elastography, which relies on the body’s normal physiological distortions created for example by the beating of the heart, the respiration of the lungs or the expansion and contraction of the blood vessels. In fact, it doesn’t matter what generates the distortion and TTP’s Passive Elastography technology is even sensitive enough to measure the small mechanical movement caused by natural hand tremor in the operator holding the probe.

Using ultrasound frequencies between 5 and 40 MHz, TTP captures sets of two or three ultrasound images at a time and measures the displacement caused by the body’s natural movement – typically around 10 microns amplitude within each set of images. TTP then looks at the structural changes visible from the data to map muscle stiffness or muscle contraction and displays this as a colour-map over the top of the ultrasound image. The result looks similar to a heat map with a resolution of around 0.5mm and up to a depth of around 50mm.

The strain imaging technology is designed for integration with existing ablation instruments or probes, to give surgeons the ability to visualise work which would otherwise be blind.

“When we started looking at ultrasound imaging for these surgical applications, it became clear that there is a need for a new imaging solution, which has enough contrast, resolution and image depth,” says TTP’s Paul Galluzzo.  “For example, optical methods such as OCT and photo acoustics provide good contrast but inadequate imaging depth in this case, while electrical impedance spectroscopy does not produce an image and traditional ultrasound can’t always tell the difference between live and dead tissue during ablation. Our new Passive Elastography approach gives surgeons much greater visibility, which increases clinical efficacy.  Ultimately the goal is to reduce the number of re-interventions, reduce mortality rates and accelerate procedure times for all ‘blind’ medical procedures.”

Passive Elastography is the latest addition to TTP’s innovative suite of medical imaging tools and technologies. A number of companies are already partnering exclusively with TTP to exploit Passive Elastography in specialist medical fields, and further opportunities are being explored.

About TTP
The Technology Partnership plc (TTP) is a world leader in technology and product development. TTP works closely with its clients to create disruptive products based on advances in technology and engineering innovation. TTP’s technology lies behind many products and processes in areas as diverse as communications, digital printing, instrumentation, consumer & industrial products, biotechnology, medical devices, cleantech and security systems.
www.ttp.com

TTP is an independent technology company where scientists and engineers collaborate to invent, design and develop new products and technologies. Working across a wide spectrum of industries including health, telecoms, industrials and consumer, TTP creates breakthrough solutions that bring strong commercial value to clients and the benefits of technology to all.