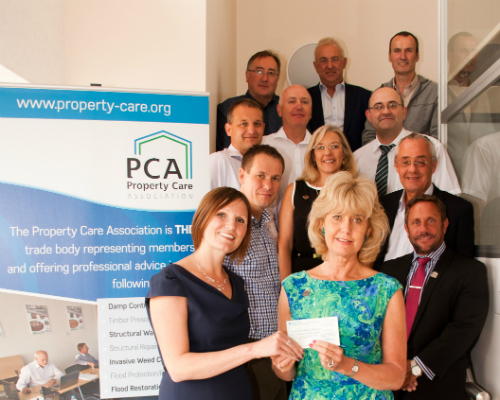 Arthur Rank Hospice Charity was delighted to collect a cheque last week after a raffle at an awards ceremony raised an impressive amount of funds.

The Property Care Association, based in Huntingdon, chose Arthur Rank Hospice Charity as the beneficiary of a raffle held at a glittering awards ceremony, which took place at Girton College last month. Raffle prizes including an Apple Watch, a Kindle Paperwhite and Beats by Dr Dre headphones helped to raise an impressive £2100 at the event, which takes place each year, rewarding the dedication of specialist companies and employees within the Property Care sector.

Highlights of the evening included an appearance from comedian Dominic Holland, close-up magic from Robert Gough and a delicious three course dinner, as companies from across the UK picked up awards work well done, with accolades including Innovation & Sustainability, Project of the Year and Employee of the Year.

Company Secretary Sue Uttridge nominated Arthur Rank Hospice Charity after a family member received care from the hospice earlier this year. She said: "Initially we hoped we might raise £1500 through the raffle, but we are absolutely thrilled that, due to the generosity of our Members and guests and some brilliant prizes, we actually raised over £2000 on the night! We would like to extend our thanks to everyone that attended our 2015 Best Practice Awards and donated so generously."

Donna Talbot, Head of Fundraising and Marketing at Arthur Rank Hospice Charity, added: "I thoroughly enjoyed the evening. It was a privilege to see an organisation championing us so wholeheartedly, alongside an event which recognises those making a real difference within their
industry. I would like to say a huge thank you to Sue, her team and all of the Property Care Association members."