Arthur Rank Hospice's team joined six others on Sunday 11th July in a fun battle of wits and endurance! 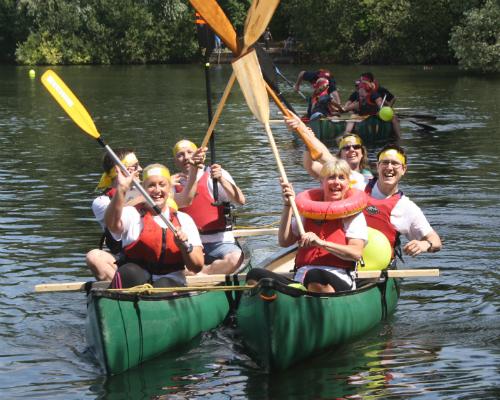 There were plenty of smiles, despite the fierce competition among seven teams vying for the Wacky Races crown, at Milton Country Park on Saturday 11th July. The adrenaline fuelled water and land based challenge event, organised by Method, with support from Step Out 4 Adventure and Living Sport, requires teams to possess both physical fitness and mental agility.

Members of staff forming the Arthur Rank Hospice team included Sheila Roberts (Specialist Palliative Care Nurse), Sarah Beedell (Receptionist), Anna Riglin (Central Referrals), Nicola Zapiain-Creamer (Clinical Lead for Psychology) and Liz Webb (Director of Clinical Services) who said: "Thank you to Kirsten and the team at Method, for arranging another fab Wacky Races. The boat was our favourite bit, the orienteering was a nice addition and of course the giant inflatable assault cause and slide finale is not to be missed."

Since the event started in 2012, it has raised more than £7300 for Arthur Rank Hospice Charity, with all money going towards the new hospice, which will cost £10.5 million and provide 24 much needed beds for patients. Organisers are yet to collate final figures of funds raised this year, but we will keep you posted.