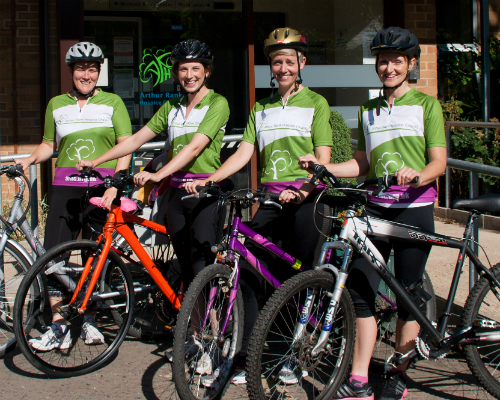 What better way to raise funds for a Medimotion bike than by the hospice's very own Therapists jumping on two wheels and taking to the hills?!

Four therapists are taking to two wheels and cycling 60 miles this Sunday (26 July) as part of their quest to raise £5000 for a second much-needed Medimotion bike for the Arthur Rank Hospice. Physiotherapists Fiona Dodds and Emma Hartley and Occupational Therapists Laurie Woodruff and Jill Fairchild decided to take on the challenge, after the first Medimotion bike became so over-subscribed that patients had to be put on a waiting list to use it.

Unlike traditional static bikes, the Medimotion bike is accessible to patients who may be wheelchair bound or have limited mobility. It can detect when a patient tires, or if they are unable to pedal, and can take over cycling for them. Such a piece of equipment is invaluable to a palliative care hospice, where those using the equipment can experience the benefits of keeping active, including the loosening of limbs, production of endorphins and prevention of deconditioning. Such benefits are harder for patients to achieve via a standard exercise programme and the Medimotion bike is fun: enabling patients to try an activity which many had believed they would never take part in again.

Fiona Dodds, Physiotherapist at Arthur Rank Hospice explains: “Patients love using our current Medimotion bike during our exercise groups and are queuing up to use it. This means the time they have to use the bike is limited so that everyone can have a go. As a team, we thought it would be lovely to be able to have another bike so that 2 patients can cycle at the same time, which might even promote a bit of friendly competition! As we are encouraging our patients to cycle (perhaps for the first time in years), which can seem quite daunting, we felt it was only fair that we gave ourselves a daunting cycling challenge: The London to Cambridge Bike Ride is just that!”

Not only have the team committed to pedalling between five and eight hours this Sunday on their London to Cambridge Cycle Ride, they have already held a pamper evening, a quiz, raffles, tombola’s and are planning an in-store supermarket cycle-a-thon collection! So far they have raised £1060 of a steep £5000 target so would be thrilled to hear from any local business or community groups who might be able to help them with their efforts, either through running their own fundraising or via a match-funding scheme.

Kath Austin, Community Fundraiser at Arthur Rank Hospice Charity, adds: “Seeing such motivation from the therapists who work every day with our current Medimotion bike, to raise £5000 to purchase another, is proof of just how effective the bike is for our patients. The team are now over the first £1000 mark and we would love to support them by finding a local business or organisation who would help champion their cause.”

For further information about the event or if you would like to support our determined Therapists in some way, please contact: Kath Austin, Community Fundraiser at Arthur Rank Hospice Charity on 01223 723186 or by email: kath.austin@arhc.org.uk (Tuesday, Wednesday & Friday 8.30am-4.30pm).

Individuals are also invited to show their support to the team by visiting their fundraising page at: https://www.justgiving.com/Arthurrankpedals/