Fruit-picking robot is the pick of the bunch 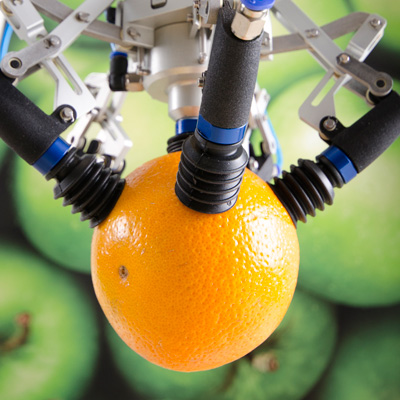 A robotics breakthrough by product design and development firm Cambridge Consultants is set to boost productivity across the food chain – from the field to the warehouse.

It paves the way for robots to take on complex picking and sorting tasks involving irregular organic items – sorting fruit and vegetables, for example, or locating and removing specific weeds among crops in a field.

“Traditional robots struggle when it comes to adapting to deal with uncertainty,” said Chris Roberts, head of industrial robotics at Cambridge Consultants. “Our innovative blend of existing technologies and novel signal processing techniques has resulted in a radical new system design that is poised to disrupt the industry.”

Robot technology has been around for a long time and robots are very good at doing the same thing over and over again within a controlled environment. Where they struggle is doing not quite the same thing over and over again. Working within a changing environment – or performing tasks that need to vary from time to time – has traditionally been very challenging for robot systems.

Robots in car production lines, for example, can move metal parts weighing hundreds of kilograms from one place to another with sub-millimetre accuracy. This is simple for the robots – and the computers managing them – to achieve, since all the parts are identical and the positions never change.

Contrast this with the task of picking up fruit and vegetables in a warehouse. To succeed at this, robots must be able to work around people, cope with irregular items, and adapt to a changing environment. Designing a robot that is able to pick a number of different items like fruit requires many tasks to be performed – from recognising the correct objects and calculating what order to pick them in, to planning the grip, and the lifting and placing of the items.

“Our world-class industrial sensing and control team has combined high-powered image-processing algorithms with low-cost sensors and commodity hardware to allow ‘soft’ control of robots when the task is not rigidly defined,” said Roberts. “The system is capable of handling objects for which no detailed computer-aided design (CAD) model exists – a necessary step to using a robot with natural objects which, although they share some characteristics, are not identical.

“Our demonstration of the technology has fruit stacked randomly in a bowl – with our robot using machine vision and some smart software to identify which piece of fruit is on top. It translates this information into real-world co-ordinates and positions the ‘hand’ to pick the required fruit, whilst avoiding other objects. The custom-made hand adapts to the shape of the fruit and securely grips it without damaging it. Once picked, the fruit can also be sorted by colour so that, for example, red apples can be separated from green apples.

“The robot system demonstrates what is possible when you bring together experts from different fields to solve a problem. We’ve combined our programming, electronics and mechanical engineering expertise with our machine vision and robotics skills to demonstrate the kind of smart system that could transform a variety of industrial and commercial processes.

Cambridge Consultants will be demonstrating its robot technology at the Electronic Design Show, October 21-22, at the Ricoh Arena in Coventry, stand B5 – and at AgriTechnica, November 10-14, at the Messegelände in Hanover, Germany, hall 15, stand F13.