Gleeds is raising funds for the Hospice as part of its anniversary celebrations, with some with some cycling themed activities across the month of September! 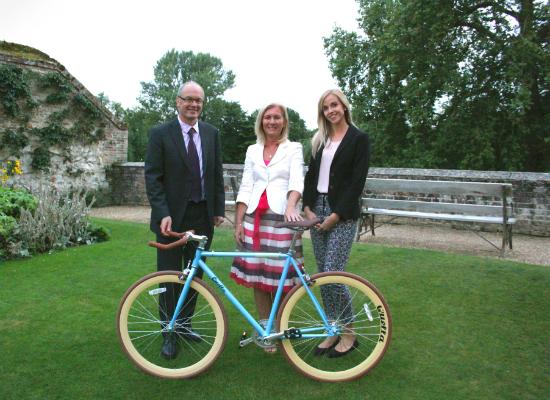 Cambridge-based property and construction consultancy Gleeds, has completed the first of two cycling-themed fundraising events in aid of Arthur Rank Hospice Charity. To celebrate its tenth year in Cambridge and 130 years in business, Gleeds has pledged to raise £130,000 for charity in one week across its 56 international offices. The initiative, known as the Gleeds Global Challenge, starts in earnest on Monday 21st September and will end on Friday 25th September.

The company’s Cambridge office had a head start last week when it donated over £700 to the Hospice during anniversary celebrations at Clare College. The proceeds came from raffle ticket sales for an exclusive, handcrafted bicycle donated by Ely bike company, Quella.

Speaking at the event Chloe Christine-Wallis, Community Fundraiser at the Arthur Rank Hospice Charity, said: “It was a beautiful event which took place in The Scholar’s Garden at Clare College, with the string quartet playing right next to the River Cam. It was a lovely way to spend the evening and I was intrigued to learn more about Gleeds’ ambitious plans to raise such an astounding amount of money in such a short amount of time. We are looking forward to supporting the team as they set out on the next stage of their cycling based challenge.”

Gleeds Cambridge is now preparing for its biggest fundraiser on Friday 25th September, when a team of 20 cyclists donning matching Gleeds cycling vests, will attempt to visit 50 complete and current construction projects by bike, collecting donations for the hospice as they travel. Commenting on this next challenge Martin Hall, Director at Gleeds in Cambridge, said: “We’re incredibly proud to be volunteering our time to help the Arthur Rank Hospice Charity, which plays such an important role in supporting individuals and their families who are affected by life-limiting illness. The charity is challenged with raising £2million every year for services which are completely free of charge to patients, their families and friends. It can be so easy to take this sort of provision for granted and not appreciate how dependent these charities are on their supporters.” He added: “Our hope for Friday is that we meet lots of people with generous hearts and do a little to help raise the profile of what is a great cause.”

Gleeds has worked on iconic projects for many of the Cambridge Colleges including: Clare, Churchill and Magdalene, in addition to schemes for locally-based businesses such as: ARM, Cancer Research UK and the Medical Research Council.

To follow the team’s progress on Friday 25th September, please follow Gleeds on Twitter at @gleedstv #gleeds130 or look out for updates on: https://www.facebook.com/ArthurRankHospiceCharity or https://twitter.com/ArthurRankHouse