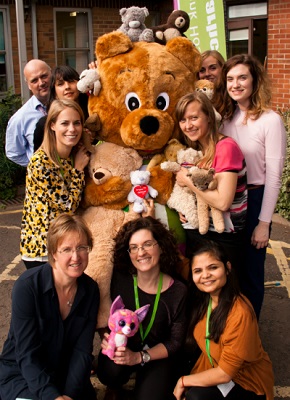 Arthur Bear and his friends at Arthur Rank Hospice Charity are encouraging you to ‘Share your Bear for Hospice Care’ during Hospice Care Week which starts on this coming Monday (5 October 2015).

The Charity is inviting you to donate £3 to the Hospice alongside sharing a photo of yourself together with your most treasured teddy bear.

The idea came about when the Hospice’s six foot cuddly mascot Arthur Bear, who joined the team this summer, overheard discussions and thought that the upcoming week was Hospice BEAR Week. Rather than disappoint, the Hospice decided to involve him. Not only is he hoping the little and big kids of Cambridgeshire will be generous enough to ‘Share your Bear’, he will also be meeting all sorts of Hospice staff in a series of ‘Arthur Bear meets…’ posts on the Charity’s social media accounts. You can like and follow the Charity’s Facebook and Twitter accounts to accompany him on his journey of discovery as he learns more about staff including a Doctor, Complementary Therapist, Chaplain, Physiotherapist and many more who work in and around the Hospice.

Hospice Care Week is an annual week of activity whereby hospices across the UK join together across the UK to raise awareness of hospice care and all the inspiring work that hospices do. You may be surprised to learn that one in three people will be touched by hospice care at some point in their lives, with 360,000 patients and family members supported by 200 hospices across the UK each year. Arthur Rank Hospice Charity - currently based on Mill Road, with a new site currently under construction at Shelford Bottom - delivers vital care to in the region of a thousand patients in Cambridgeshire each year through the 12 bed Inpatient Unit, Hospice at Home Services and Day Therapy, alongside a broad range of wide reaching and holistic services, which support a further two thousand individuals. Care is made possible by a diverse range of dedicated staff and volunteers, focused on supporting people with life-limiting illness to live as fully as possible. The charity is challenged with raising £2million every year to fund care and services which are completely free of charge to patients, their families and friends.

The theme for the week this year is Connecting Care and it is hoped that Arthur Bear’s adventures during the week will highlight, celebrate and build upon the essential and wide-reaching connections which the Hospice relies on. Liz Webb, Clinical Director and Deputy CEO, adds: “The staff at Arthur Rank Hospice Charity are really excited about the prospect of meeting Arthur Bear during Hospice Care Week and telling him and his friends in the general public more about what they do on a daily basis. Please ‘Share your Bear’ like we have and consider texting to donate £3 to Arthur Rank Hospice Charity. Each person connected to the Hospice plays an important part in the intricate network of support which the Hospice relies on to fulfil its very special job.”

To ‘Share your Bear’, please post a photo of yourself together with your favourite bear during the week starting Monday 5th October. Tag your photo post with #HospiceCareWeek and #ArthurBear and text ARHC03 to 70070 to donate £3.

The Charity would also be delighted if you would share this message with your friends, family and connections: