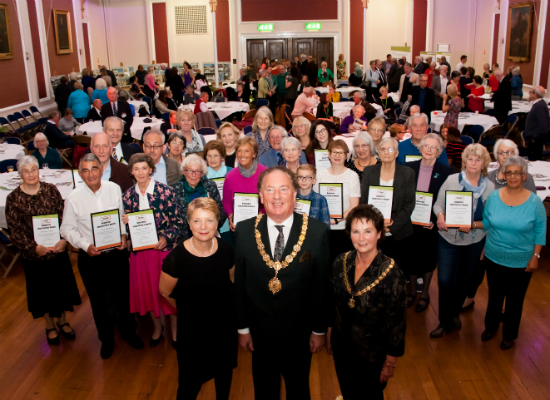 The evening was attended by more than 140 guests including trustees, staff, relatives, healthcare professionals and supporters and provided a valuable opportunity for the Charity to share its latest news, look back at the successes of the last year and recognise the vital contribution of our wonderful volunteers.

The Charity was delighted to host the event in the beautiful surroundings of The Guildhall after the Right Honourable Mayor of Cambridge Cllr Robert Dryden, chose to support the hospice during 2015/16 as one of his charities. Introductions were provided by the Mayor’s Master of Ceremonies with Chair of Trustees Stuart Evans over-seeing proceedings, before CEO Lynn Morgan and Clinical Director and Deputy CEO Liz Webb spoke about the progress made in the last twelve months including the Hospice’s move to independence, shared some thoughts from those touched by its work and updated guests on the progress being made at our Shelford Bottom site.

The Mayor presented twenty seven volunteers with awards for five, ten fifteen and twenty years’ service. Their roles reflect the myriad of volunteer input to the hospice and its’ services and include chaplaincy, serving afternoon tea, helping in the Charity’s Shops, driving, assisting on the Inpatient Unit, manning the tea bar and the library and supporting day therapy with the youngest, Freddie Turner aged twelve, receiving his award for five years’ service.

Highlights of the evening included guests being treated to moving a cappella performance by the Arthur Rank Hospice Community Choir, delicious canapés provided by Kristen’s Eat the Rainbow and an insight into the month-by-month progress at the new hospice site via a display of Helena G Anderson’s photographs, which she has taken at the site since the building works began.

Donna Talbot, Director of Fundraising and Communications at the Arthur Rank Hospice Charity added: “We would like to extend our heartfelt thanks to everyone who has supported the Hospice and continues to do so. As we look back at the past year and ahead to the next, there is no doubt in our minds that the support, kindness and generosity of the local community is what makes our progress possible. We would like to thank Vale Craft Audio Visual Ltd and Anagram (now trading as Hawthorn) for their technical assistance, as well as – of course – Eat the Rainbow for the nibbles, Helena Anderson for her photographs and Cllr Dryden for the venue and his unwavering support.”