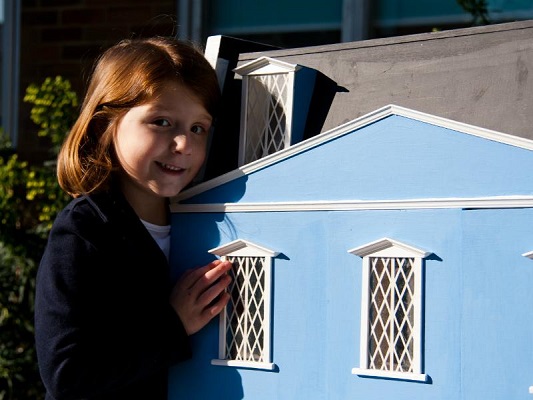 Ebony Alda from Soham, made a special half term visit to the Arthur Rank Hospice Charity in Cambridge earlier this week. The youngster and her family were handing over the refurbished dolls' house she has kind-heartedly decided to donate to the Charity, so they can raise money to “help people who arepoorly.”

Her Dad, Steve explains how this came about after a chance meeting with Bev Lorking, a long-standing volunteer of ten years at Arthur Rank Hospice: “We first starting talking to Bev when Ebony was two years old. She was standing on some grass and I pointed out a man walking his dog. He came over and started talking to us and it turned out that he often comes into my work – Ridgeons - to get bits of timber to build and renovate dolls' houses. Over the years we have got to know him and learnt all about Arthur Rank Hospice.”

Mum Lucy explains further: “Ebony has always loved her dolls' houses but Bev gave her a smaller one which fitted into her room much better. He said he’d restore her original larger one and Ebony decided that rather than have two, she wanted to donate one to the Arthur Rank Hospice. She’s always thinking of others. Even when she earns 20p for doing a job around the house, she puts it in the pot we have for our family holiday, rather than keeping it for herself or spending it on sweets.”

Bev has lovingly restored the larger Dolls' House and the Charity is now hoping to raise funds from Ebony’s generous donation by auctioning it on eBay. Measuring 2.3ft high, just over 2ft deep and 2.4ft across, it has a bright red front door and furniture including everything from a shower to bedside table lamps, tiny beds to miniature cups & saucers. It is in need of a good home where it will be played with and well cared for. When asked what the best thing about the Dolls' House is, Ebony comments: “That it will raise lots of money as it’s so big with lots of different rooms and furniture. The purple bedroom is the best.”

PR & Communications Officer at the Arthur Rank Hospice Charity, Dawn Easby adds: “It was a delight to meet Ebony and hear about why – at such a tender age - she wanted to help the Hospice. We hope people will feel motivated to share the story of her dolls house donation with their friends and people who they think might be interested in bidding on it. We’d love to generate some interest and conversation around it to help increase bids and raise an amount to equal her generosity!”

Further details are available by calling the Arthur Rank Hospice Charity Office on 01223 723186 between 9am & 5pm, Monday to Friday.