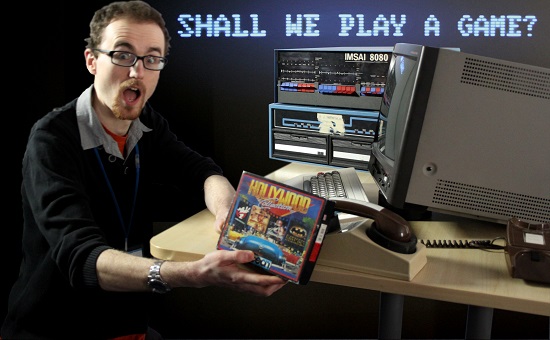 A new gaming exhibition will open at the Cambridge Centre for Computing History on Saturday (26th March). Lights! Camera! Play! will showcase how games and cinema have influenced one another from the 70s to the present day through displays of objects, playable games, and more.

Ever since video games were first developed for mass consumption, they have had a close relationship with cinema.

Across the 20th century, film producers and directors fought first for financial success and then for cultural legitimacy alongside music, literature and art.  For the last 40 years, games developers and publishers have been doing the same thing. So it’s little wonder they have looked to Hollywood for inspiration.

The exhibition will explore the relationship between these two mediums.  Visitors will see how early licensed games tried to piggyback on the success of a Star Wars or James Bond film and how developers have fallen in and out of love with cinematic methods of storytelling.

Most importantly, they’ll see how the history of games development has been influenced by the allure of Hollywood and whether this influence has changed gaming for the better.

Jeremy Thackray, Assistant Curator at the Centre, said: “This exhibition is one of the first of its kind in the UK.  Using our vast collection of over 8,000 games, we are aiming to explore a specific part of games design and culture through hands-on displays of games, objects and more.”

On the opening day, 26 March, the Centre will be digging further into its archive to get loads more playable movie-themed games on display.  Special film screenings will also be taking place during the exhibition: Wreck-it Ralph (2012) on March 26, WarGames (1983) on April 2, and Tron (1982) on April 16. Screenings will take place during the evening and must be booked in advance as spaces are limited.

The exhibition will run from 26 March to 15 May.  For more information visit: www.computinghistory.org.uk

The film follows David Lightman, a young hacker who unwittingly accesses WOPR (War Operation Plan Response), a United States military supercomputer originally programmed to predict possible outcomes of nuclear war. Lightman gets WOPR to run a nuclear war simulation, originally believing it to be a computer game. The computer, now tied into the nuclear weapons control system, and unable to tell the difference between simulation and reality, attempts to start World War III.

The computing revolution has been responsible for wholesale social and cultural transformation, irreversibly changing our ways of thinking, communicating, organizing, working and playing on a speed and scale unparalleled in human history. Our core purpose is to increase understanding of developments in computing over the past 60 years through exploring the social, cultural and historical impact of the digital revolution. Our aim is to bring this exciting, profound and tumultuous story to life.

We also do lots of unusual ‘stuff’ – engaging youngsters in fun ways with off-curricula engineering and electronics; designing creative coding workshops; running ‘tech tents’ at big national events such as the BBC’s Make It Digital campaign; evolving the country’s most extensive archive on personal computing; and building learning and partnership links with local tech businesses to deliver exciting computing projects in the community – all with the aim of helping people, especially young people, develop the 21st-century skills they need to thrive in the 21st-century workplace.

Since opening in Cambridge in late 2013, over 20,000 visitors, including 10,000 children, have visited the museum, benefited from our workshops, interactive exhibits and informative tours. Through a creative educational programme, the Centre provides the opportunity for children of all ages to encounter, engage and enjoy a diversity of computing experiences.

CCH is currently developing two new Cambridge-related archives: a Sinclair collection and an Acorn collection.
The Centre is open from Wednesday-Sunday, 10am-5pm.  It will also be open on the 28th and 29th March and the 4th and 5th of April for the Easter holidays.  Admission to the new exhibition is included in our standard entry prices of £8 for adults, £6 for 5-16s, £24 for a family (2 adults and 2 children) and £6 for students and over 60s.  Under 5s are free.