Over £20,000 raised by Cambridge Half Marathon runners last month 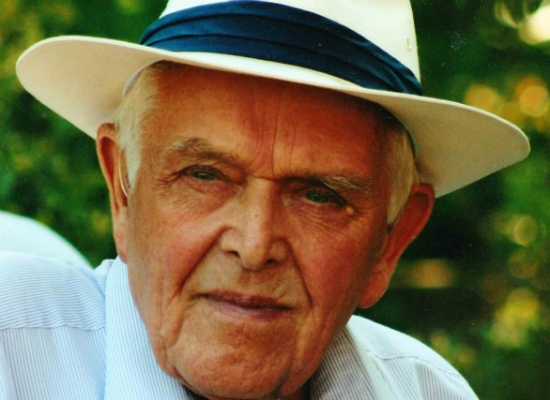 More than 60 #TeamARHC runners have collectively raised £20,317.70 for Arthur Rank Hospice Charity, with sponsorship yet to be sent in. Many of those who took on the challenge on Sunday 28 February have personal connections to the Hospice, including some who have experienced its care for a loved one first hand.

One such runner was Alex Levitt-Powell, who took up running as a serious hobby following the passing of his Grandad, Don Roope (pictured) who was cared for by Arthur Rank Hospice in 2014 after being diagnosed with cancer at the age of 92. He said of his Grandad: “Don was an amazing man who was dearly loved by his family and friends. He always had a smile on his face and a sparkle in his eye.”

He explains the care his Grandad received: “In Don’s final weeks he said goodbye to his home on the outskirts of Cambridge after being offered a place in the hospice. This was a decision that we (his family) or he - would never regret. When I look back on his last few days with us, I remember a few things very fondly: I remember him spending quality time with his family, his wife (Grandma) and enjoying speaking with other patients and staff at the hospice. I thoroughly believe that my Grandad’s final few days were fulfilling to both him and his family and that he was cared for perfectly by the hospice staff.”

He adds: “We will always be indebted to the Hospice for caring so beautifully for my Grandad. Although I’m sure the staff would say that they are only doing their job, to us they were much more than that and when Grandad did pass away, we felt as a whole at peace.”

Like many of #TeamARHC who have experienced the care of Arthur Rank Hospice first hand, he was motivated to want to help raise money for the Charity which, through its vast range of services and holistic approach to care, looks after over 2500 people living with a life-limiting illness and their loved ones in Cambridgeshire each year:

“Following my Grandad’s passing I took up running as a serious hobby and in 2015 decided to joined #TeamARHC and attempt to repay them in any way that I could. Having finished the 2016 Cambridge Half Marathon in (time) I am aiming to do the run again next year as well as the London Marathon!”

Not content with raising £334 in his efforts for Arthur Rank Hospice Charity so far, he has recruited other members of his family to join in: “My cousin Jono has also joined in with the fundraising recently and has raised a fantastic amount too. I will always try my hardest to raise money for such a worthy cause that is so close to our hearts. We are both proud members of #TeamARHC!”

To supplement the NHS contribution, the charity is required to raise £2 million annually to fund the additional services provided by the hospice. If you would like to support Alex’s fundraising efforts, please visit his fundraising page at https://www.justgiving.com/Alex-Levitt-Powell which will be open for online donations until August.

Alternatively if you feel inspired and would like to join forces with #TeamARHC please visit http://www.arhc.org.uk/challenges.asp or call the charity offices and speak with Amy Bidwell, Community Fundraiser for Challenges.