Top of the leaderboard 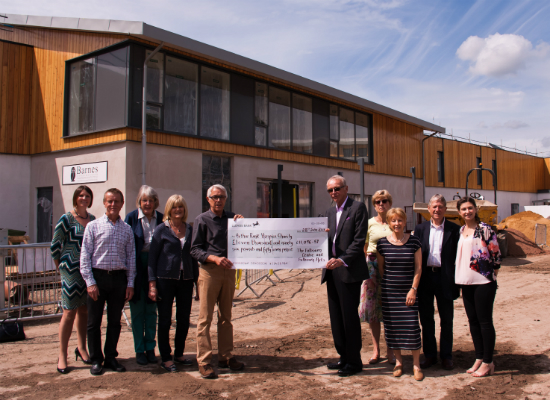 Arthur Rank Hospice were delighted to be invited to benefit from a very special event earlier in the year.

An evening with Anton Du Beke, Erin Boag and Friends was hosted at the Fulbourn Centre On 7 May. Organised by Fulbourn Centre and Fulbourn Arts, the committee embarked on an event especially for their local community, which allowed them to raise vital funds for the charity whilst also showcasing their super venue.

With Dave Olney, local resident and member of the band, which supports Anton & Erin on their own touring show ’Gotta Dance,’ attracting the top list celebrities, the evening was a rapid sell out as the Fulbourn Centre played host to more than 300 guests.

A fundraising target of £10,000 was set but on Tuesday 28 June, the committee visited the new hospice site, having raised an extra 10% donating a grand total of £11,069.57. The money was raised through tickets sales, a raffle, generous donations on the night.

The funds will help towards the remaining £2.3 million now needed to complete the £10.5 million project which is expected to be open to patients by the end of the year. Ron Ward comments:"We are thrilled to have raised so much and supported this worthy and much valued charity. We felt the event was a success on so many levels and discussions have already started as to whether we could host another event of this type in 2018."

Donna Talbot adds ’"This was a wonderful community event, it bought local people up really close to their dancing heroes. The intimate setting offered a much difference experience to seeing these personalities on a stadium or arena tour and from the feedback we have received it will hold a special place in the hearts of those who attended."

The committee saw plans of the hospice, were able to meet the site manager, Matt Ramplin of Barnes Construction and also see the construction team in action. With less than three months until the building is handed over to the charity, landscaping has started and internally flooring is being laid and wardrobes fitted.