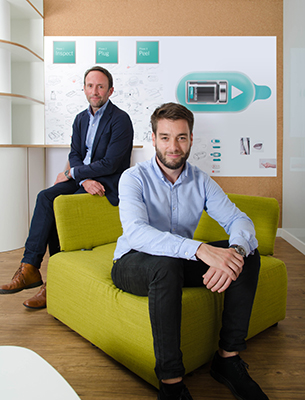 It has also been named one of the top design studios in the world – achieving fifth place in the design concept category of the Red Dot Design Ranking, which recognises the top 15 companies, design studios and universities that have continuously invested in design and innovation.

The 2016 award, announced today at a gala event in Singapore, has been won by the Plug & Play wearable pump injector concept, which Cambridge Consultants has designed to make treatment with biological drugs safer and easier. It follows the success of the company’s KiCoPen battery-free smart insulin pen concept in last year’s competition.

The ‘Red Dot’ is one of the biggest and most illustrious design award schemes in the world. It is one of the most sought-after quality marks for excellent design – and regularly attracts around 5,000 entries from more than 60 countries for the design concept category.

“To have won Red Dot Design Awards two years in a row is a fantastic endorsement of the world-class expertise of our product designers,” said Dr Matthew Allen, head of drug delivery at Cambridge Consultants. “This is yet another example of how the combination of innovative technology and great design has the potential to change people’s lives.

“Next-generation drug delivery devices need to offer patients the option of treatment in a way that not only minimises pain but also fits in with their lifestyle. Our extensive experience of user-centred design within a strict regulatory framework has enabled us to create the Plug & Play wearable pump injector concept, which lets patients take control of managing their disease. It gives them access to treatment away from a hospital environment – in the comfort of their own home – without compromising their lifestyle.”

The Plug & Play concept is designed to cope with biological drugs, which are used for the treatment of conditions such as cancer, rheumatoid arthritis and multiple sclerosis. Their biophysical properties mean they can be more viscous or come in larger volumes than traditional injectable drugs – so they can be difficult to inject in the traditional way.

“Injectors capable of delivering biologic drugs are also not usually compatible with established manufacturing and filling processes – they typically require the use of bespoke drug containers. For pharmaceutical companies, this means additional testing – which delays new treatments getting to patients. There is a need for an injector that accepts a standard off-the-shelf vial – to streamline development and get drugs to market faster.”

The simple, single-step, plug-in mechanism of the Plug & Play concept allows patients to easily insert a standard vial into their device, removes the need to transfer drugs between containers and reduces the steps to prepare an injection. Once the vial is inserted into the wearable injector, the patient simply presses the play button and the injection starts – removing the stress and anxiety associated with more complex devices, and letting the patient get on with their life.

The Plug & Play concept has colour-coded feedback – visible through the vial – and a clear view of the drug, which helps patients keep track of how the injection is progressing. Its flexible design converts any standard-sized vial into a ready-to-use drug container – allowing a range of biological drug volumes to be injected. This also means that pharmaceutical companies do not have to carry out extra tests for using additional drug containers. As a result, the regulatory pathway for new drugs becomes less complex – and time to market for crucial biological drugs is reduced.