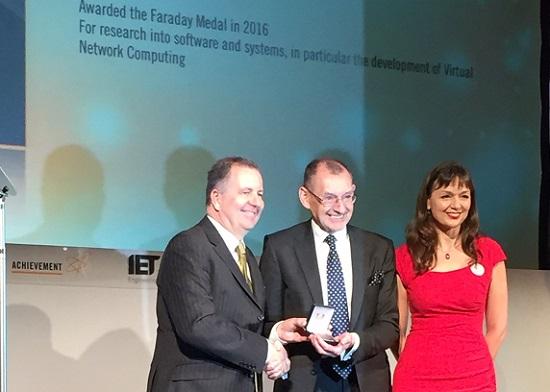 The Faraday Medal dates back to 1922, and is awarded for notable scientific or industrial achievement in engineering and for conspicuous service rendered to the profession. Dr Harter is a Fellow of St Edmund’s College and Cambridge University Computer Laboratory. He founded RealVNC in 2002 with Lily Bacon.

Dr Tim Constandinou, Chair of the IET Awards and Prizes Committee, said: “The Awards and Prizes Committee was unanimous in recommending Dr Harter for the IET’s Faraday Medal.  Dr Harter’s work over many years has proven to have wide-ranging impact. This includes leading the development of successful technology such as Virtual Network Computing (VNC), which has created new markets and brought significant economic and environmental benefits. VNC remains the most popular remote access software as well as the most ported, with over 1 billion copies on more different kinds of computer than any other application. Dr Harter is equally skilled at creating new pathways to commercialisation, pioneering open source without compromising profitability. Through his philanthropy and mentoring initiatives he is supporting others to follow his example.”

The prize consists of an engraved bronze medal and vellum scroll, presented at the awards ceremony in London yesterday. The recipient also signs the Roll of Honour album, a leather-bound volume containing the photographs and signatures of all Faraday Medallists.

Dr Andy Harter said: “It is a tremendous honour to have received this award. It recognises a career in innovation and enterprise, during which it has been an enormous pleasure to lead some extraordinarily talented teams of people in research, development and commercialisation of advanced systems. It is also a privilege to have been responsible for making substantial technology freely available, which has had significant impact on a global scale.”

RealVNC was founded in 2002 by the original developers of VNC to promote, enhance and commercialize VNC. ...