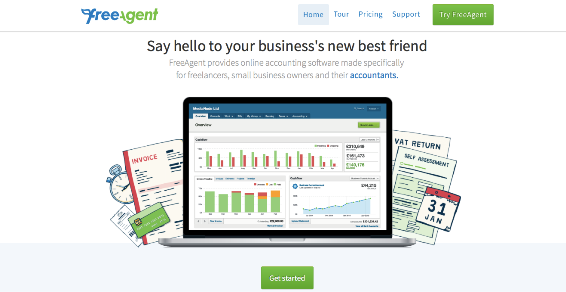 Cloud-based accounting software provider, FreeAgent Central, started trading as a public company on the London Stock Exchange’s Alternative Investment Market (AIM) on the 16 November 2016 and raised £8 million in the process. Congratulations to Tom Haggett and the rest of the FreeAgent Central team.

FreeAgent Central provides online accounting software made specifically for freelancers, small business owners and their accountants. It launched in 2007 from a frustration that managing company finances was too hard for most small business and freelancers and has since stuck to its mantra of demystifying accounting and redefining the relationship people have with their finances. Tom joined as an early employee, and now FreeAgent Central employs over 110 staff, with plans for further expansion in the next few months.

This is the first IPO for an ideaSpace company. Tom, who runs the Engineering Operations team, said the process has been a long one and there was a great deal of due diligence work involved. That said, floating on AIM provides many valuable benefits to listed companies including raising cash and the company profile, as well as incentivising staff with share options.

Dealings in FreeAgent Central’s shares commenced under the ticker ‘FREE’ and the company has said FreeAgent had a market capitalisation of approximately £34 million. Find out more about FreeAgent Central here.

The Alternative Investment Market (AIM) was set up in 1995 to encourage investment in start-ups and smaller companies. There is much less red tape involved in getting listed on AIM, so it is considerably quicker and less costly to get on than the main London market. It has now become the most popular way to float, with almost 400 companies joining up in 2005 alone. This comes as little surprise as AIM has collectively raised £17 billion for its members in its first decade. It offers the capital-raising benefits of a public flotation combined with a flexible regulatory approach (source: www.mybusiness.co.uk)