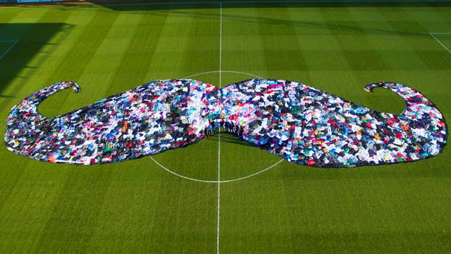 This Movember, Arm took growing a mo’ to an unprecedented level, creating a giant handlebar moustache made out of donated clothes and raising funds for the Movember Foundation along the way.

Every November, Arm employees from around the world, from the UK to Taiwan to Bangalore, raise funds for the Movember Foundation, which aims to tackle the biggest health issues facing men on a global scale. In the last three years, Arm has raised more than £70,000 for the Foundation.

As part of Arm’s Movember fundraising this year, which raised £27,174 in total, a 610m2 moustache was crafted from 804kg of clothes donated by Arm employees, with a drone capturing footage of the mammoth clothes collage, hosted on Cambridge United’s 1st team pitch. The clothes were then donated to mental health charity Mind, where they are hoping to raise £4,000 through sales.

Arm is committed to encouraging its employees to use their skills for the benefit of its local and global communities, and in addition to building the gigantic moustache and conducting fundraising activities, Arm hosted educational sessions with guest speakers to help raise awareness and provide information on the biggest health issues facing men today; testicular and prostate cancer, and mental health and wellbeing.

Arm received an official thank you from the Movember Foundation for its support of the campaign:

“The Movember Foundation would like to extend a huge thank you to everyone at Arm for their continued support of Movember and men’s health. This year we saw 14 teams get involved across the globe, a giant moustache made out of donated clothes, and £27,174 raised globally,” said Sarah Manning of the Movember Foundation. “The funds raised are helping address the three biggest issues affecting men, prostate cancer, testicular cancer, mental health and suicide prevention. So a huge thank you from the Movember Foundation, with your support we can continue to invest in ground breaking programs that benefit all men.”

Cambridge United provided their football pitch as the arena for Arm’s moustache-making:

“It was really exciting working with Arm to raise awareness of the Movember Foundation and the great work they do on men’s health issues,” said Ben Szreter, CEO, Cambridge United Community Trust. “Arm has brilliant community links and does excellent charitable work, so it made sense to team up to deliver this innovative project. The final result, a huge Movember moustache on our pitch made up of clothes to be donated to charity was stunning and Cambridge United are proud to be a part of it.”