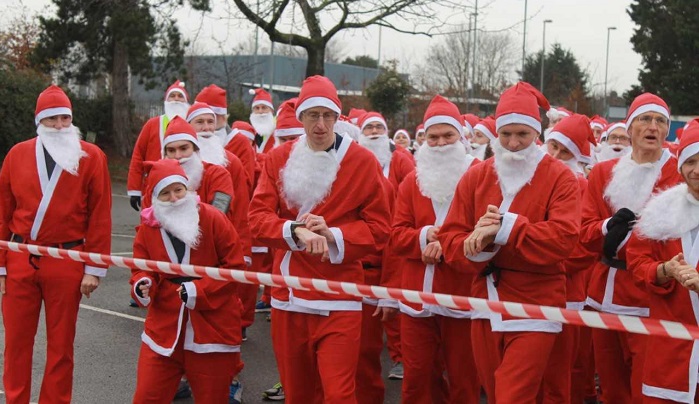 Supporters of East Anglia’s Children’s Hospices (EACH) have been getting well and truly in the Christmas spirit by taking part in a series of festive fundraisers.

EACH began the month by hosting a special concert at Trinity College Chapel, where members of Cambridge, St Neots and Huntingdon Rock Choirs sung whilst special guest Ian de Massini played the organ. They were listened to by a sell-out audience of 325, who helped raise over £10,000.

EACH has held more traditional carol services in St John the Baptist Church, Peterborough and All Saints Church, St Ives recently, those raising £840. The charity will hold its final service in Milton tomorrow night.

Grace Nalty, EACH Cambridgeshire Fundraising Assistant, said: “We were thrilled to have so many join us in Cambridge for a fantastic performance by Rock Choir members and are now enjoying our more traditional carol services across the county.”

Meanwhile, employees of Granta Park and Cambridge Science Park have been raising money by donning their best red overalls and white beards.

Over 215 from the former, along with two dogs, took part in an inflatable Santa Run. There was also a tombola, mince pies and choir from Great Abington Primary School for participants to enjoy. The event raised £3,300 and counting.

From the latter, over 140 braved torrid weather to take part in a Santa Run last week. The Royal Society of Chemistry provided over 50 volunteers and its choir a musical accompaniment. JezO’s Events supplied a PA system and Revolution Fitness led the warm-up. Proceedings brought in at least £2,200.

Kellie Charge, EACH Cambridgeshire Corporate Fundraiser, said: “A massive thank you to Tracy Thomas and Eleanor Miller at Granta Park for all their help, as well as Cambridge Science Park. The support of everyone, particularly given the freezing weather we’ve had, has been fantastic. The two events together have raised more than enough to fund a day of our care and support across Cambridgeshire.”

EACH cares for children and young people with life-threatening conditions in East Anglia – currently 116 from its Milton hospice - and supports their family members – 113 from Milton. It has to raise more than £5 million a year from fundraising to sustain that vital service. For more information go to www.each.org.uk.