Runners visit children’s hospice ahead of Cambridge Half Marathon 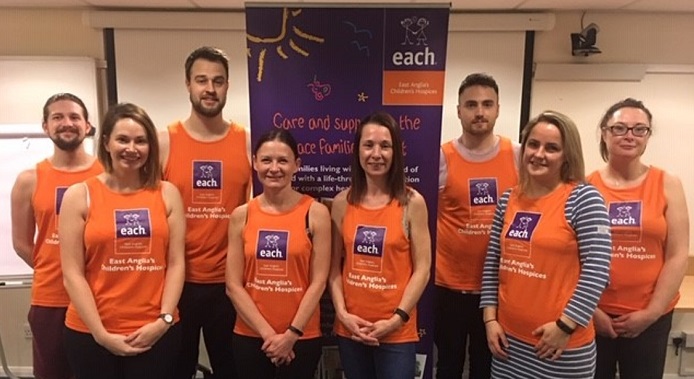 Supporters of East Anglia’s Children’s Hospices (EACH) running the Cambridge Half Marathon on Sunday 3 March visited the charity’s Milton hospice this week.

As a local charity partner of the event, EACH was allocated 30 places to help mark its 30th anniversary of delivering care and support from Milton.

Runners have been aiming to raise £280 each for the good cause and got to see what difference their money would make when they had a hospice tour. Afterwards, they were presented with their EACH running vests.

Bronte Graver, EACH Cambridgeshire Community Fundraiser, said: “The Cambridge Half Marathon has established itself as a big event in the city calendar, so we were delighted to receive 30 places in the event this year and I’m pleased to say, from the meetup we had on Tuesday, the runners are making the most of this opportunity for us. We wish them the best of luck for the day and would, also, like to say thanks to everyone who’s sponsored them.”

The Cambridge Half Marathon takes place on Sunday 3 March and will see 10,000 runners take on the flat, single loop, 13.1-mile course that starts and finishes at Midsummer Common.

EACH cares for 128 children and young people with life-threatening conditions in Cambridgeshire, and supports 89 family members, as well as hundreds more across the region. Its Milton hospice was established in 1989 and EACH will be celebrating its 30th anniversary later this year.

The charity, reliant on voluntary donations for the majority of its income, will also be hosting its own running event, the Huntingdon Bubble Rush, on Sunday, 9 June. The 5k fun run will see participants head off amongst a sea of bubbles, before passing four bubble stations where cannons pump out coloured foam to create a four-foot (1.2-metre) deep bubble bath! Head to www.each.org.uk/bubblerush for more information.