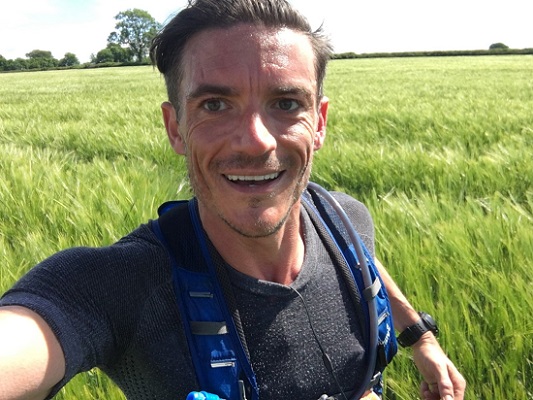 A father-of-two from Cambridgeshire is getting set to leave the UK on Friday (29 March). Rather than a show of political discontent on the originally-planned Brexit day, though, Raoul Monks’ departure is to help launch a new fundraising campaign from East Anglia’s Children’s Hospices (EACH).

The idea of EACH Mile Counts is that people take on a sporting challenge, doing it their way and in their time. It might involve swimming the length of the River Thames at a community pool or cycling the distance of Land’s End to John o’ Groats.

Raoul, 40, is an experienced marathon and ultra-marathon runner, so has decided to take on seven marathons in seven days across seven countries.

Raoul said: “The Brexit date didn’t dawn on me until after I’d booked all seven flights. Doh! The logistics have been and continue to be a nightmare. I have to finish every marathon by lunch, find a shower so I don’t offend other flyers, get to the airport and check in, fly to the new destination, hopefully avoiding DVT (deep vein thrombosis) - I think it’s a minimal risk - eat enough food and get to sleep in time to rest enough before I start again the next day. Planning isn’t my strength, but hopefully things will run smoothly.”

Raoul’s first 26.2-mile (42km) run will be from Greenwich to Hyde Park on Friday. He will then head to Amsterdam, followed by Berlin, Paris, Venice, Geneva and Sardinia.

“I know Sardinia’s not strictly a country, but don’t tell anyone! I’ll need to average sub-four-hour marathons on most days and I’m doing the entire trip solo. I’m used to running in groups, so this’ll take a different type of determination.”

Raoul has confessed to not having planned efficiently and is only just getting around to booking each hotel in each country. He also believes that, in an ideal world, he would have done more training.

“I’m regularly running 40 miles a week and did a 45-mile run from Wendover to London in January to get some distance in my legs. Frustratingly, due to all the running, my Achilles has started to get a bit angry with me. Training is now tough as I don’t want to make it worse, but also don’t want to stop the running.”

Raoul began running 16 years ago when he joined his brother for the Paris Marathon. He started running ultra-marathons in 2013. He admits he is “a bit addicted”.

Explaining why he had chosen to take on this particular challenge, Raoul said: “I wanted to do something that scared me and would push me to my limits both physically and mentally. I did a multi-day run from London to Birmingham over five days last January and had an amazing experience. I wanted to do that and more. I originally looked at running across Sardinia, but people said that just sounded like a nice, hot holiday and, wanting to raise as much money as possible, I thought I should choose something that’d get people’s attention. I’ll need to push myself more than ever and am only accountable to myself. I know I’ll find this hard.”

Raoul runs a sales and marketing training business in London. He lives in Houghton and has organised charity runs there in years gone by. His stepmum, Ann, is an EACH Trustee, so he has heard a lot about what the charity does.

“Hearing the stories makes me realise how lucky I am to have two amazing children who are healthy and happy. Not every child has this privilege and I felt I needed to do something to make a difference.”

Raoul hopes to raise £2,000 from his challenge and plans to celebrate by putting his feet up in Sardinia, “grabbing a beer and doing nothing for two days”. By that point, if everything has gone to plan, Raoul will have run 183 miles (295km).

That will be logged on EACH’s website, where a ‘wall of fame’ will show who is taking part in EACH Mile Counts and what they are doing. There will also be a totaliser keeping track of the collective amount of miles covered. EACH hopes to see it hit at least 5,000 as the charity offers its free care and support to children and young people with life-threatening conditions, and their families, across an area of approximately 5,000 square miles.

“The idea is this is a great, big virtual event anyone and everyone can get involved in as it’s all about your challenge, your way. Take on a challenge that’s difficult for you, irrespective of how difficult it may be to others, and help us continue our vital work.

“It’s really simple to get involved and our wall of fame, as well as featuring your name and a photo, will allow you to write about your challenge. There’s also the facility to make a donation and/or pay in sponsorship money.

“This campaign also serves to highlight that more than half the care and support we deliver is out in the community, in family homes and hospitals, with our staff constantly on the move across the 5,000-plus square miles of East Anglia.

“All money raised will go towards this crucial service we provide for children and young people with life-threatening conditions, and their families.”

For more information about EACH Mile Counts, to get inspired and get involved, go to www.each.org.uk/EACH-Mile-Counts now.