Home of Patrick Steptoe 'father of IVF' gets Blue Plaque 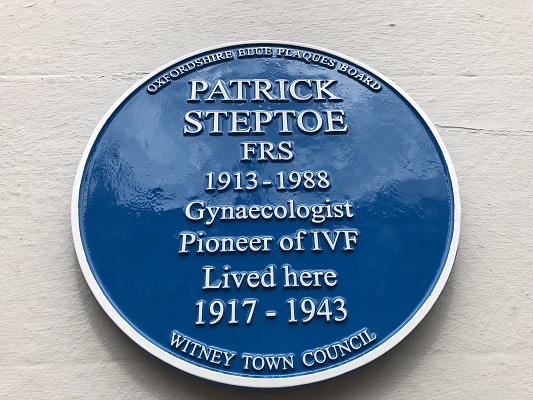 The childhood home of Patrick Steptoe, one of the three IVF pioneers who achieved one of the greatest scientific breakthroughs in recent times - the birth of the world’s first ‘test-tube’ baby – has been commemorated with a Blue Plaque.

There have been over 6 million babies born worldwide following treatment by IVF, a medical treatment developed by Steptoe with Robert Edwards and Jean Purdy at Bourn Hall; the clinic they established after their success with Louise Brown and Alastair Macdonald the first IVF babies.

Steptoe was a consultant obstetrician and gynaecologist at Oldham Hospital in Lancashire, with a special interest in female infertility and diagnostics techniques, when in 1968 he met with Edwards, a Cambridge geneticist and embryologist. This was shortly before Edwards achieved the first successful fertilisation and development of a human embryo outside the womb.

Steptoe was an expert in laparoscopy, a forerunner to keyhole surgery, that would allow the collection of mature eggs without abdominal surgery. He also had a large number of patients that would benefit from IVF if it had been available. Many of these women agreed to assist with the research by donating eggs.

Working in their spare time, with the assistance of Jean Purdy who was running the laboratory, the three began a difficult and frustrating journey to transfer embryos to the womb and achieve a live birth. This took a further ten years and succeeded with the birth of Louise Brown.

Unable to get the support of the NHS to set up a facility, the three gained funding from a benefactor to set up a private clinic at Bourn Hall in Cambridge and began to develop the techniques that would transform the scientific research into a robust medical treatment.

Louise Brown comments: “Patrick Steptoe was like a grandfather to me. My mother, Lesley Brown, always said that she trusted him from the first moment that she met him. Patrick Steptoe died when I was 10 years old so I did not know him well. We last met when we were guests on a TV programme together and he was proud of the children he had helped bring into the world. His legacy will live on as there are now millions of people in the world who owe their existence to the work of the IVF pioneers.”

Dr Mike Macnamee worked with Steptoe Dr Mike Macnamee, now CEO of Bourn Hall, worked in the 1980s on the development of the medication that would be used to control the natural cycle and boost egg maturity. He comments: “Everybody working in the field and beyond knew about the birth of Louise Brown and the really exciting work that Patrick and Bob were doing. I wanted to be part of that development. Patrick was inspirational.”

Steptoe passed away on the 21st March 1988 just after receiving the news that Bourn Hall had achieved its 1,000th IVF baby. And now a second generation of women, like Amy Harris – Norfolk’s first IVF baby, who has just given birth to her own IVF baby, are benefiting from his work.

Bourn Hall provides NHS funded IVF to patients across Bedfordshire, Hertfordshire, Norfolk, Suffolk and parts of Essex, sadly NHS funded treatment is not available in Cambridgeshire - the home of IVF.