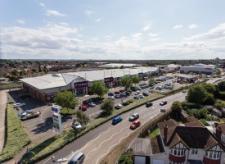 The land on which St John’s Retail Park stands was the original headquarters of CAEC Howard in the 1970s and home to the block-making and haulage division.

The retail park was developed in the mid 1980s and sold to Schroders REIT in 2015.

END VALUE: The project value of these assets is £32m

A further unit was constructed adjacent to Homebase, which was let to Maplin. The second phase of the park opened in 1995 and comprises six units. At the time of sale, these were let to Carpetright, Mothercare, Currys PC World, Wren Living, Hobbycraft and a Costa Coffee drive-thru unit.

In the years prior to disposal, Howard Group invested heavily in modernising the retail park to meet current retailer standards. A total of £2m was invested in the park to reconfigure units and install modernised fascias and building/estate signage.

This investment secured a number of new tenants and breathed new life into the estate.

The sale of St John's marks an important milestone for Howard Group as the site housed the CAEC Howard headquarters in the 1970s, sitting alongside the group's transport, warehouse and garage divisions.

Howard Group is an established and successful property and capital investment business based in Cambridge with interests throughout the South East.