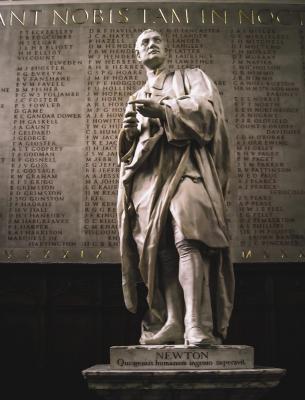 Great science on its own just isn't enough... history tells us you've got to have a story to tell to really make a mark.

You know sometimes someone makes a brief, throwaway comment, but it sticks with you?

That happened to me this week, and with style.

I was talking to a the chief executive of a brilliant science company I work with.

We were discussing an important presentation he was giving, I made a suggestion, and he said:

- That’s what you’ve always brought to us. We do great science, but we’re not good at the storytelling.

Why did it stay with me?

Because I started to think about all the examples of storytelling in science, and how they help breakthroughs, innovations, and discoveries take root in the public mind.

Let’s face it, most people aren’t great at science, don’t find it that interesting, or would even give a great deal to avoid it.

Yet it’s so important in our lives.

- That device you’re reading this blog on: a scientific innovation.

- The Covid vaccination you had: another great scientific advance.

I’ve come to the conclusion that science is far less likely to make a splash without some storytelling being involved.

Here are just a handful of examples I jotted down.

It goes back 2300 years, but pretty much everybody knows the story of Archimedes.

He was the ancient Greek who realised that an object immersed in water loses the same amount of weight as the fluid it displaces.

But how is he, and his principle popularly remembered?

By a little story:

- That Archimedes was so excited by his discovery that he jumped out of his bath yelling eureka!

Mark Zuckerberg, whatever you think of him, has created a world beating business which has changed our lives.

He was the university dropout who started it as a way for college students to connect with each other.

That's become a big part of the story of Facebook, one that, way back when people were trying to understand the new world of social media helped the platform to become successful.

But he's probably best remembered for his theory of gravity.

Why do we remember it so well?

Because of the story attached, that Newton came up with his theory after watching an apple fall from a tree.

It's a lovely insight into how such a profound idea became part of public life courtesy of a simple story.

One of the terrific businesses I work with here in Cambridge is Orca Scan.

They've produced a system which allows you to track anything, anywhere in an instant.

I won't go into the tech, mainly because I haven't a hope of understanding it.

But apart from the power of the product, what helps the company make a mark is the story behind it.

Orca grew from a summer job project, when founder John helped his son Owen to crack a problem with tracking a series of items.

They worked together on a solution, which then grew and grew, until today it's an international business with some very big name clients.

Science Storytelling In The DNA

Scientific discoveries don't come much bigger than the structure of DNA, the basis for molecular biology.

But what do many people remember about Crick and Watson's discovery, here in Cambridge?

The moment they'd cracked it, they headed straight for the nearby Eagle pub to celebrate with a pint.

A lovely quirk of human nature, and a very British tradition, helped to cement the moment in the public mind.

In conclusion, you might have a terrific innovation, breakthrough, or discovery…

But without a story to accompany it, it’s far harder to capture the public imagination, which is critical for success.

That's particularly the case in the early days, before your work becomes widely known.

So if this is your field, do your best to find yourself a story to tell.

Whether it's how your innovation came about, an insight into its use, a vision of the future it could herald...

Or even how you celebrated.

Science and storytelling may not instinctively feel like they walk hand-in-hand, but they do, and to powerful effect.

By the way, if you'd like help with your storytelling, please get in touch.

It's a speciality of Creative Warehouse, and, quite frankly, one of the most enjoyable parts of our job.

If there's one thing we love, it's telling great stories.

Want to learn more about the art of storytelling? Sign up for Cambridge Network's Learning Collaboration half day Blog Writing training course, when the author of this blog, Communications Consultant Simon Hall, will take you through all you need to know to write a compelling blog. The next session takes place this week on 8 July. Find out more here.

I'm a tutor, lecturer and coach in Communications and Business Skills at the University of Cambridge. I also run my own media, public relations and design consultancy, Creative Warehouse, work in government, and across the private and public sectors.
I can offer communications support in all areas, including:
Branding, reports, investment pitches, presentations and speech writing ~ Conventional and social media ~ Websites ~ Photography and videography ~ Public speaking ~ Crisis communications ~ Building your personal brand