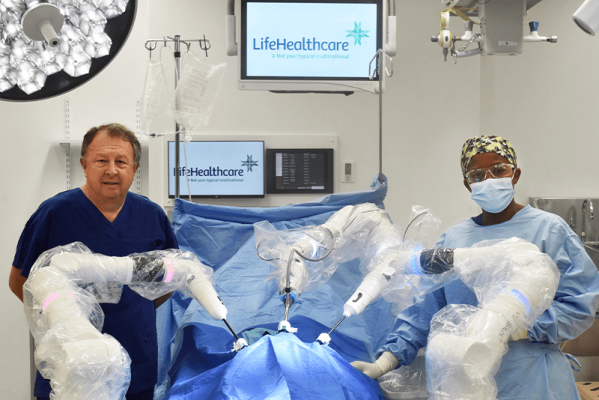 CMR Surgical (CMR), in partnership with LifeHealthcare, today announced the launch of its Versius® Surgical Robotic System in Australia.

Macquarie University Hospital – a leading private teaching hospital based in Sydney – is the first to use the system following approval from the Australian Therapeutic Goods Administration (TGA) in late 2019, which allows Versius to be used in a broad range of laparoscopic (minimal access or keyhole) procedures.

Australia is a highly advanced surgical robotics market where robotic assisted minimal access surgery (MAS) has been used for nearly two decades. The launch of Versius represents a significant opportunity to progress this further and drive greater uptake of MAS across the region. With Australia experiencing significant annual growth in surgical robotic procedures, there is strong potential for Versius to play a key role in shaping surgical practice in the coming years, offering a versatile new choice for hospitals and surgeons and supporting optimal patient outcomes.

Per Vegard Nerseth, Chief Executive Officer of CMR commented: “Australia is well-known for leading the way in medical innovation and the launch of Versius represents another example of this in practice. The arrival of Versius opens the door for hospitals and surgeons to be able to access this cutting-edge technology, helping them to deliver the best surgical care possible. Australia joins a number of markets around the world who are now routinely using Versius and is another important addition for CMR as we continue towards our aim of making minimal access, or keyhole surgery accessible to all those who may benefit.”

While MAS is associated with a range of well-recognised benefits for patients, when performed manually without the aid of robotics it is also associated with high physical demand on surgeons. Versius was designed to tackle this issue. The three independent arms – biomimicking the human arm – coupled with the 3D visualisation and unique instrument control, reduces stress and fatigue for surgeons, which remains critical for career longevity.i

Professor David Gillatt, Professor of Urological Oncology and Robotic Surgery and Director of Medical Services at Macquarie University Hospital commented: “For many years, the options for robotic-assisted minimal access surgery have been limited in Australia. Versius is an important new addition as it is significantly more versatile, meaning I can perform intricate surgeries more efficiently, with greater accuracy and ease. For my patients this can mean less pain, shorter hospital stays and quicker recovery. I look forward to seeing more hospitals and patients being able to benefit from this new technology in the near future.”

Macquarie University Hospital has acquired Versius to help perform a range of surgeries including general, urological, and gynaecological procedures.

Mr Walter Kmet, Chief Executive Officer, Macquarie University Hospital, said: “We are delighted to be creating history and to be at the very forefront of medical science. This is a really exciting development for Australian hospitals and surgeons. Our team at Macquarie University Hospital are the first in Australia and among only a handful in the world to pioneer this new innovative type of robotic surgery.

Founded more than 50 years ago to offer students, staff and partners a more flexible alternative to the prevailing university model, Macquarie University is now reaping the rewards of its innovative, interdisciplinary approach. Macquarie is widely regarded as a progressive institution, both locally and internationally. Ranked among the top one per cent of universities in the world, and with a 5-star QS rating, the University is considered one of the world’s best, producing highly sought-after graduates. With a strong tradition in pioneering thinking, ingenuity and exploration, Macquarie University continues to break new ground as it works to solve some the world’s most pressing issues to build a positive future for all. www.mq.edu.au

Macquarie University Hospital comprises of 182 beds, 12 operating theatres and is staffed by over 200 surgeons and medical specialists.  ”