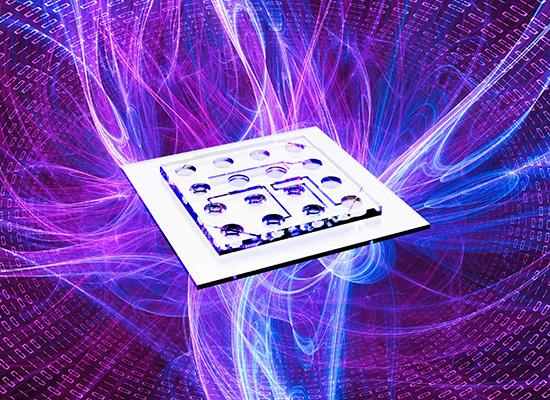 Working with NETRI’s brain-on-a-chip technology and lensless imaging approach that detects the activity of neurons in brain tissue, Cambridge Consultants was able to accelerate the processing of individual images by over three orders of magnitude, moving from about 20 minutes to process an image to just hundreds of milliseconds. This step-change in speed opens up radical new possibilities, including real-time processing of neural activity and mimicking of neural activity on engineered platforms, supporting the development of novel treatments for conditions such as Parkinson’s and Alzheimer’s diseases.

Organ-on-a-chip is an emerging and highly promising area of biomedical research. The technology involves the ex-vivo (outside of the body) simulation of organ function on a chip. The ultimate promise of such technologies is to greatly reduce the time and cost of testing new therapies for safety and efficacy. Brain-on-a-chip technologies seek to apply this approach to the neural circuitry of the brain, the most complex organ in the human body.

French startup NETRI creates disruptive technologies for brain-on-a-chip applications in neuroscience. Its focus is on ex-vivo replication of human neural circuits in order to understand how neurological disorders, treatments and chemicals affect the brain. NETRI uses a combination of brain-on-a-chip technology and lensless microscopy to record the activity of millions of connected neurons, mimicking the neural circuits implicated in neurological disorders.

However, by detecting something as complex as neural activity, the approach generates an enormous amount of data, requiring many hours of computation effort in order to fully reconstruct the spatio-temporal map of neuron communication. The imaging system runs at approximately 1,000 frames per second, and the baseline algorithm took an average of 1,090 seconds – 18 minutes – to process a single image on a powerful desktop PC. Without improvement, a single second of recording can take 12 days to process.

Recognizing its world-class expertise in medical imaging and high-performance computation, NETRI approached Cambridge Consultants to address this bottleneck, challenging the company to develop a radical algorithm acceleration. A scientific imaging team was set to work within the company’s Data Lab, an on-site facility with state-of-the-art compute infrastructure, allowing rapid exploration of data and compute-heavy approaches, such as high-definition imaging and deep learning.

Cambridge Consultants selected the NVIDIA DGX POD architecture for their AI infrastructure, deploying the NetApp ONTAP AI solution that combines NVIDIA DGX-1™ with NetApp ONTAP storage and network fabric. Through a series of optimizations, the team was able to show that the NVIDIA DGX-1 system delivers the AI supercomputing power required to process a frame in an average of 0.3 seconds, around 3,000 times quicker than the original approach. This acceleration was achieved through a series of optimizations including the design and application of mathematical and algorithmic improvements, leveraging NumPY GPU-accelerated with RAPIDS (CuPy), and exploiting the sheer power of the DGX-1 system. The combined result enables NETRI to completely reimagine their approach and to set their sights on the most radical possibilities, including developing a fully scalable and real-time medical service for hospitals and pharmaceutical industries to perform both in-vitro diagnostics and personalized treatment for every patient suffering from a neurological condition.

Sally Epstein, Head of Strategic Technology at Cambridge Consultants, commented: “Lensless imaging replaces traditional optics with computation, creating a new set of optimization challenges that our team was excited to address. We’re proud to be at the leading-edge of developments in brain-on-a-chip technology and neural imaging, at the point where radical improvements can be unlocked by those with the right combination of vision, experience and compute power.”

Thibault Honegger, Chief Scientific Officer, President & Co-founder of NETRI, commented: “By combining the expertise of Cambridge Consultants with NVIDIA-based computational power, the real-time processing of neural communications becomes possible. This can mark a paradigm shift in assessing the functional aspects of in-vitro neural networks. With this level of resolution, we will be able to accurately measure the “wellness” of the network, in relation to neurological conditions and potential recovery.”

For over 60 years, Cambridge Consultants has been helping its clients turn business opportunities into commercial successes, whether they are launching first-to-market products, entering new markets or expanding existing markets through the introduction of new technologies. ...