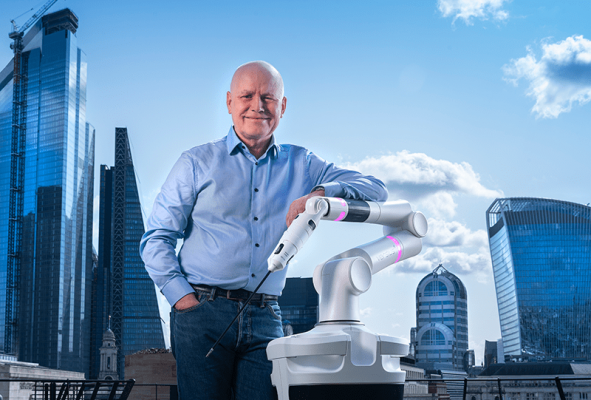 CMR Surgical (CMR) is delighted to congratulate Martin Frost, one of the company’s founders, former CEO and now Non-Executive Director, on being awarded a Commander of the Order of the British Empire (CBE) in Her Majesty The Queen’s Birthday Honours List, for his services to British industry.

Mr Frost co-founded CMR Surgical in 2014 with a mission to help millions of people around the world get keyhole (minimal access) surgery and to benefit from the multiple advantages this type of surgery brings.  To address this need, CMR Surgical created the Versius® Surgical Robotic System. Versius has now been deployed across the UK, France, and India over the past year.

Mr Frost has previously been involved in starting and leading numerous technology and life science companies including the Cambridge technology consultancy, Sagentia. Martin was recognised as UK ‘Disruptor’ of the year in the EY 2019 Entrepreneur of the Year awards and ‘Executive of the Year’ at the 2019 MedTech Insight awards recognising his success in taking CMR from inception to global commercialisation.

As well as being a Non-Executive Director at CMR Surgical, Mr Frost continues to work alongside and mentor young leaders and purpose-driven companies in the diagnostic, medical devices and energy sectors including Cyted CB2tech, and Creavo. Earlier in 2020 Martin took up the Chair of Peek Vision, a social enterprise bringing sustainable access to eye health across the world, spun out of from The London School of Hygiene and Tropical Medicine.

Lord David Prior, Chair of NHS England said: “The development of a surgical robot by CMR is a triumph of British technology and entrepreneurship. CMR have taken on and beaten some of the world’s biggest companies. I have met Martin all over the world, from India, Europe and the USA, as he has tirelessly presented the CMR robot to healthcare systems.  The UK led the first industrial revolution, CMR has shown us that we can lead the fourth.”

Per Vegard Nerseth, Chief Executive Officer of CMR Surgical commented: “On behalf of everyone at CMR, I’m delighted to congratulate Martin on being awarded a CBE.  This is fantastic recognition for someone who has dedicated his career to helping people around the world through the use of advanced technology in a way that significantly improves their lives. We owe a debt of gratitude to him for his vision and drive in creating CMR Surgical to help transform surgery for good.”

Claire Ruskin, Cambridge Network, commented: "We are delighted, Martin has made a great contribution to Cambridge business and UK employment."