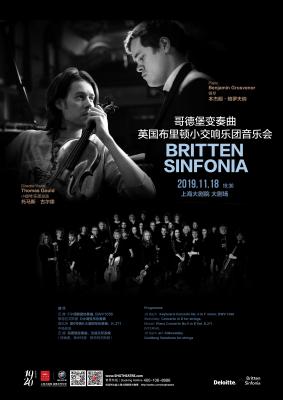 Deloitte is delighted to be supporting Cambridge based chamber orchestra Britten Sinfonia as they travel to China on their Tour of Asia.  They will be performing concerts in Wuhan, Guangzhou, Beijing, Taipei and Shanghai.

Deloitte is supporting their Shanghai concert, part of Shanghai Grand Theatre’s Classical series on Monday 18 November in connection with Deloitte colleagues in Shanghai and Cambridge.

Pianist Benjamin Grosvenor directs Britten Sinfonia in Bach and Mozart from the keyboard in this eclectic and illuminating programme of music spanning almost 300 years. Alongside this, Britten Sinfonia’s Leader, Thomas Gould directs the orchestra in Sitkovetsky’s orchestration of Bach’s iconic Goldberg Variations.  The evening’s programme will include J.S. Bach, Stravinsky Concerto in D for strings; Mozart Piano Concerto No. 9 in E Flat and after the interval, J.S. Bach arr. Sitkovetsky and Goldberg Variations for strings.

Paul Schofield said ‘We are very pleased to support the excellent, locally based Britten Sinfonia. The Asian tour and concert in Shanghai has allowed the continuation of the collaboration between our own Cambridge and Shanghai teams. Many local businesses operate on a UK/China axis and we expect to see both inbound and outbound investment increase over time."

Just over 25 years ago, Britten Sinfonia was established as a bold reimagining of the conventional image of an orchestra. A flexible ensemble comprising the UK’s leading soloists and chamber musicians came together with a unique vision: to collapse the boundaries between old and new music, to collaborate with composers, conductors and guest artists across the arts, focussing on the musicians rather than following the vision of a principal conductor; and to create involving, intelligent music events that both audiences and performers experience with an unusual intensity.

The orchestra is named after Benjamin Britten, in part a homage to its chosen home of the East of England, where Britten’s roots were also strong.