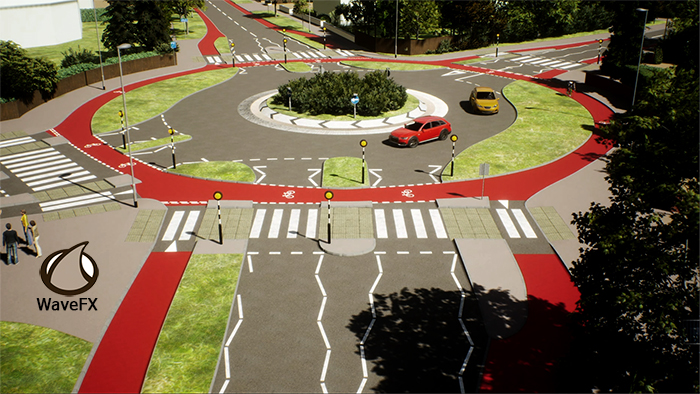 In its latest journey WaveFX has produced a series of animations, 360° visuals and an interactive video for a scheme in Cambridge, namely Fendon road and the construction of the UK’s very first truly Dutch inspired roundabout.

The £2.3m roundabout, in Cambridge, became the first in the UK to give cyclists the right of way over motorists when it opened on July 31st.

Media coverage was positive, with the animation shown on ITV, BBC and Sky News and picked up in most of the national papers and social media sites such as BuzzFeed and Forbes.

Grant Weller of Cambridgeshire County Council said: “I’ve been working with WaveFX and Chris Trill on a number of our highways schemes for around three years now.

"It was vitally important that the video should show how the individual interactions between pedestrians, cyclists and motorists should take place.

"Chris understood my early conceptual ideas and the vision I had for the final outcome perfectly, which is not always easy to do, and produced a video that surpassed all my expectations”.

Chris, the lead animator at WaveFX, created bespoke plug-ins to produce the algorithms to simulate real-time traffic flow and these 3D and 360 models were then rendered out in 4K via “Unreal Engine” a system normally used in game development.

WaveFX is based in Cambridge but operates nationwide

If you’d like to talk through your latest Unreal Engine 3D project, video or animation call Jamie or Chris at WaveFX on 01223 505600 or email hello@wavefx.co.uk