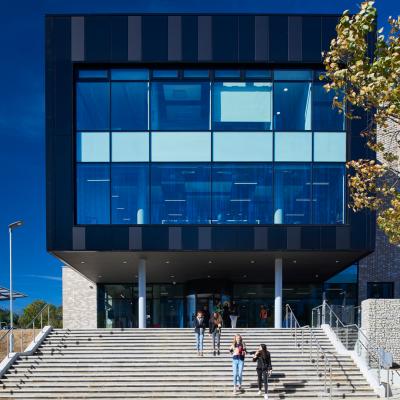 When Anglia Ruskin University's New Medical School was looking for an exam management solution, it turned to Speedwell to help. Read the full case study here...

With a vision to educate and train doctors ready to practice modern medicine in the 21st century, Anglia Ruskin University’s brand-new School of Medicine had clear priorities for their exam management. Looking for a solution that matched this vision and would continue to meet their future needs – the team turned to Speedwell to help.

Anglia Ruskin University (ARU) has a long history – founded as Cambridge School of Art in 1858 by art critic and philanthropist John Ruskin – over the years a number of colleges and institutes have joined to form the University that we know today.

For the last 25 years, ARU has been the largest provider of nursing, midwifery and allied health courses in the East of England. Building on this history and expertise, in 2018 they embarked on their latest exciting chapter and opened a brand-new School of Medicine.

ARU School of Medicine was the first new Medical School to open under the government initiative to boost the number of doctors training across England. They welcomed their first students in September 2018.

When it came to looking for a solution for the new School’s admission interviews and examinations, it was apparent that investing in an online exam management system was the direction that ARU wanted to take.

Jo Colbert, the Undergraduate Assessment Manager at ARU School of Medicine, together with her colleagues began looking for a solution. The successful solution needed to have the scope required for the exams as well as being compatible with their existing infrastructure and systems.

After receiving demonstrations of several products, it was decided that Speedwell’s eSystem software delivered what they were looking for. Not only did it provide the functionality required for their exams (now and in the future), but it fulfilled all their other priorities too.

The first of these priorities was security.

Jo explains: “We needed a system that we could be confident was secure. Not just during an exam, but throughout – Speedwell’s eSystem provides that enabling us to deliver valid and robust examinations.”

For online exam delivery, the secure exam browser function has provided the School of Medicine with that reassurance. When students are taking an exam, they are locked into the browser and cannot access any other functions, websites or programmes.

Additionally, the offline OSCE app was a key deciding factor. This provided security and peace of mind that exams could run uninterrupted, even if the WIFI network failed.

Jo explains: “It was the reassurance that even if there was a problem with the WIFI, it would not interfere with the exam. The examiners could continue with the scoring and the student experience was not disrupted”

Secondly, having the right support when it is needed was another driver in choosing Speedwell’s eSystem Jo reveals: “The support was a key part of the demonstration, especially how we could access it as needed” which she says she has found to be true. She continues: “I’m confident I can pick up the phone to the helpdesk and the support is there. Whatever the problem it can be sorted out”

Jo was also impressed with the clear guidance and instructions that can be accessed via the eSystem. These along with the software’s intuitive nature have been invaluable in allowing her to troubleshoot and work through any issues. Something she has found particularly useful especially since time had elapsed between the training and the setting up of the first exam.

Other crucial deciding factors that the eSystem also delivered on, were functionality and usability (for all involved administrators, students, examiners) and the ability to integrate into the student management system via an API.

Having made the decision, time was of the essence to get up and running for the first set of admissions interviews being held in the summer. Six hundred candidates were interviewed over a three-week period, giving the School of Medicine their first cohort of 100 students.

To select the successful candidates, the School use Mini Multiple Interviews (MMIs). The format is a 10 station MMI, with each candidate being examined at each station in turn.

During the MMI set-up, Jo requested a couple of features that would aid the running of the MMIs and the exporting of data, which Speedwell were happy to include in their next release. Once created, the MMIs were delivered via the offline OSCE app on the School’s own Samsung tablets. During the interviews, candidates progressed around the stations with the examiners scoring them directly in the OSCE app on the tablet.

Jo was delighted that everything worked really well and all of the interviews ran smoothly.

Since running the first MMIs, The School of Medicine has now completed their second round of MMIs for admissions in 2019 as well as running their first mock single best answer (SBA) exam. The attitudes of staff, examiners and students to the software couldn’t have been better according to Jo:

The mock SBA was the first time that the new medical students had taken an online exam using the eSystem. To help prepare them Jo gave a demo and ensured that everyone had the opportunity to use the software to build confidence ahead of the exam.

Afterwards, students were complimentary, finding the formatting with accessibility tools useful with the review screen at the end of the exam also being a popular feature. Jo says: “The student feedback after we ran our first online SBA exam was great. They all felt the software was very straight forward”

Jo also highlights that examiner feedback after the MMI and OSCE exams has been equally strong: “Even examiners who are not confident with technology liked the eSystem’s OSCE app – they like the fact that they can’t break it!”

For ARU, having such an intuitive system has been invaluable but the greatest impact has been having the confidence to run online exams from the beginning.

Being a new Medical School, they were in the unique position of being able to introduce an online exam management system from the outset. The contingency plan was always a paper or manual system, which Speedwell could also support but, this was very much a last resort option.

Jo explains: “Speedwell’s eSystem has performed to all our expectations. It’s allowed us to confidently deliver a fully automated programme of online interviews and exams straight away – exactly as we wanted”

In the near future, Jo and her colleagues are looking forward to running the first summative exam in the summer and completing a full year of exams.

Beyond this, they are keen to use some of the eSystem’s features that they have not yet explored. For example – the remote authoring app. Currently, exam questions are imported into the question bank via word but, going forward using the app will automate this process further.

Using the detailed student feedback reports is also on the agenda. Initially, the focus for the team was to get the exams running smoothly so this feature has not been used yet. However, Jo recognises that being able to provide students with quick and comprehensive feedback will enhance their experience further.

Finally, as the School of Medicine runs more exams and further data on question and exam performance becomes available, Jo is looking forward to using the statistics to inform and improve future assessments.

This will not only provide a positive outcome for students, but it will also ensure that the School of Medicine continues to deliver the best examinations in the future.

“Speedwell has really delivered on their promises – eSystem delivers exactly what we were told it would. And knowing this is backed up with excellent customer support, whenever we need it, is incredibly reassuring”

If you would like to find out more about eSystem, any of its features, or arrange a personal demonstration then contact us. Call our sales team on +44 (0) 1223 851703 or email info@speedwellsoftware.com