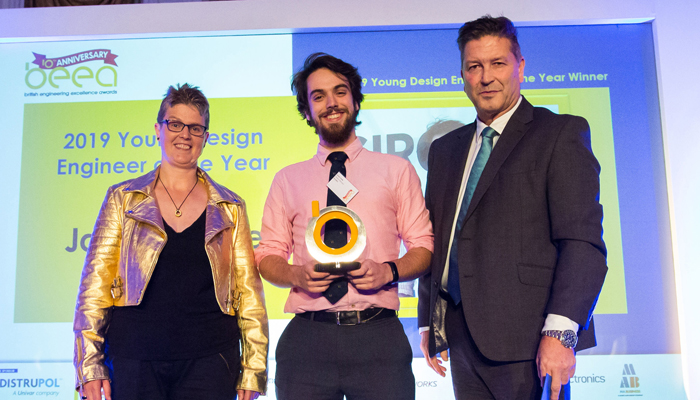 James was chosen as the overall winner within his category in recognition of his technical contribution in helping GiroNEX to develop and launch its first product series at such an early point in his own career, and for his personal qualities as an ambassador for the engineering profession.
James joined GiroNEX as a graduate engineer in 2017 and went on to help the company launch its Cube system for automated precision powder dispensing earlier this year.  The judges were also impressed by his active involvement in helping local secondary schools to run competitive robotics events and getting their students excited about engineering design and programming.
This year’s judging panel included Pete Lomas, honorary president of Institution of Engineering Designers, and co-founder and trustee of the Raspberry Pi Foundation; and Philippa Oldham, head of the national network programmes at Advanced Propulsion Centre.
Image (left to right): Professor Lucy Rogers who hosted the awards event and is a science author, inventor and judge from the BBC 2 show ‘Robot Wars’; James Veale from GiroNEX; and Pete Malpas, regional managing director, Northern Europe at RS Components, sponsors of the Young Design Engineer of the Year category.