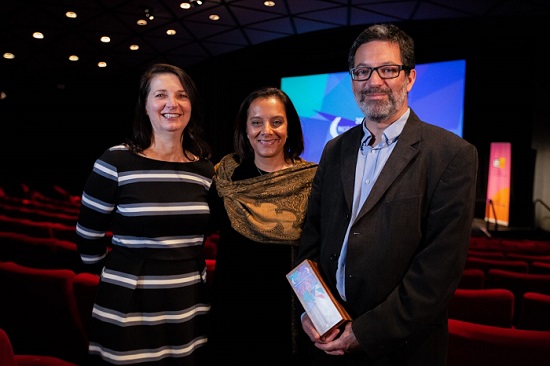 A filmmaker from Anglia Ruskin University (ARU) has won a prestigious national award for the best film on the topic of mental health or wellbeing.

Produced in collaboration with Professor Topun Austin, Consultant Neonatologist at the Neonatal Intensive Care Unit (NICU) at the Rosie Hospital in Cambridge, the film focuses on a newborn baby who had been starved of oxygen following complications at birth. The ‘golden window’ refers to the crucial 72-hour period after birth where cooling the baby by 3c can minimise long-term brain injury.

The Golden Window, which was filmed in 2012, follows the progress of Baby J over 72 hours using innovative film and soundtrack to capture the experience from the baby’s perspective. Including interviews with parents and staff, it captures the emotional journey of having a sick newborn infant at the NICU.

In the 7 years since the film was made Baby J has made remarkable progress, as have the other children of parents who were filmed at the time.

Dr Patel, the BAFTA-award winning Director of ARU’s StoryLab research institute, said: “The Golden Window was a wonderful co-creation built on the incredible trust of Topun and his team, and the unbelievable generosity of the parents and carers of these fragile lives within the emotional space of the NICU ‘bubble’.

Professor Austin, Consultant Neonatologist at Cambridge University Hospitals NHS Foundation Trust, said: “The Golden Window pushes the boundaries of communication through film, conveying feelings and emotions that capture the intensity and uncertainty of having a critically ill baby on intensive care. At the same time it provided a unique platform to convey complex scientific information in a novel and engaging way.

“This was a true collaborative effort between very different worlds and the talent and vision of Shreepali and her team is clear to anyone who has seen the film.”

The Golden Window, which has been shown at documentary film festivals and displayed as a multi-screen film in digital galleries, was co-produced with ARU’s Sophie Jackson.  The full 22-minute version of The Golden Window can be viewed here.  In addition to the Research in Film award, Dr Patel also received £2,000 from AHRC towards future filmmaking projects.

The judging panel for the Arts and Humanities Research Council (AHRC) Research in Film Awards 2019 was chaired by Jan Dalley, Arts Editor of the Financial Times, and also included Sir Peter Bazalgette, Chairman of ITV, and Steve Harding-HiIl, Creative Director in Commercials and Short-form at Aardman Animations. The awards ceremony took place at the British Film Institute in London.